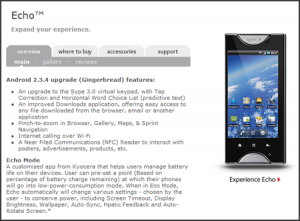 Kyocera’s website is now listing the details for the Android 2.3.4 Gingerbread update as it pertains to their dual-screen Echo.  Expected to have begun rolling out this week, the update brings a number of new features to the device, breathing new functionality into the handset.  Among the details are support for Wi-Fi calling capability, Near Field Communications (NFC), and a new Echo Mode for battery and performance optimization.

We can’t recall ever hearing the Echo as having NFC support and we don’t know why Kyocera or Sprint would keep it a secret, but we’re not going to complain now.  As for the Wi-Fi calling capability, we’re hoping to learn more here as well.  We’ve reached out to Kineto, the company who powers T-Mobile‘s Wi-Fi calling feature, to see if they were responsible for the Kyocera option.

UPDATE: And just like that, the two awesome features we were blindsided by, NFC and  Wi-Fi calling, are no longer part of the update.  Should have known better, eh?

Head to Kyocera’s website to read more about the Gingerbread update for the Echo.  Does the $99 dual-screen handset sound more appealing to you now?