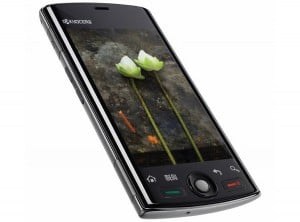 Handset maker Kyocera was in Las Vegas last week to show off their new Android-based Zio M6000.  Touted as a mass-market device for first-time smart phone buyers, it’s rumored to land on Sprint at around $99 with a contract.  This marks the first smart phone from Kyocera in over five years and comes roughly two years after merging business with Sanyo.  As many of you might already know, Sanyo handsets were a longtime staple in the Sprint lineup.

The Zio M6000 features Android 1.6, a 3.5-inch touch display, a 3.2-megapixel camera, microSD slot, WiFi, and a host of other specs increasingly common in Android phones.  Kyocera plans to have the handset on a nationwide US carrier by the 3rd quarter of 2010 and expects to have Android 2.1 as well. By that point, Android enthusiasts will likely scoff at the phone, but that’s fine with Kyocera.  They are not going after the early adopters and tech junkies.  The plan is to appeal to those who have never owned a smart phone and/or have a tight budget.

I spent some time playing with the phone at CTIA and found it to be rather unremarkable.  The ho-hum specs and form factor did little to excite me.  That’s not to say, however, that it wouldn’t have broad appeal with the right price point and rate plan.  At $99, the Zio M6000 could have a very difficult time contending with the likes of HTC, Samsung, and Motorola.  Considering the potential competition in the second half of the year, I’d like to see this in the $0-$50 price range when it arrives.