AdMob released their February 2010 report last week and it confirms what we’ve been seeing and saying for the last year or more: Android is growing very quickly and it’s chopping away at the competition.  Over the span of 12 months, Android has gone from 2 percent smart phone market share worldwide to 24 percent.  Much of the growth comes at Symbian’s expense with the Nokia-flavored OS dropping from 43% to 18% share over the same period.

Here in the United States, Android continues to gain steam as it grew from 27 percent to 42 percent share over the last four months.  The iPhone appears to be bearing the brunt of Android’s assault, dropping from 55% to 44% in the same time frame.  Another month of the current trend and Android could eclipse the Apple behemoth for us in the US.  To be fair, it’s nearly impossible for one handset to stave off an onslaught of phones that only gets bigger and better. 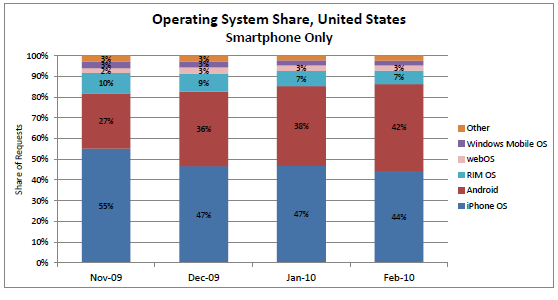 Of course, these numbers are not 100% accurate nor should they be considered definitive.  However, as long as the “system” stays the same, it should still provide valuable insight.  So how does AdMob compile their data and put these estimates together? They measure requests from a network of over 15,000 mobile sites and applications and calculate percentages based off of individual handsets.

The top 5 Android handsets in terms of requests on the AdMob network were the Motorola Droid, HTC Dream, HTC Hero, HTC Magic, and the Motorola CLIQ.