It looks like all the rumors are coming together, as benchmarks have been released for an upcoming 8-inch Samsung tablet thanks to the Dutch website TechTastic. Sources at the site say they have discovered the 8-inch tablet in the GLBenchmark database, carrying model number SM-T311 (which we presume is the Galaxy Tab 3 8.0.)

As we have reported before, rumors told us that the upcoming device will feature an 3-megapixel camera on the back with a 1.3-megapixel front-facing camera, and weigh just slightly more than the 7.9in i-Pad Mini. Now thanks to the leaked details, it can also be said that the Galaxy Tab 3 8.0 is equipped with an 8-inch WXVGA (1280 x 800) display. The tablet is powered by a dual-core 1.5Ghz Exynos 4412 processor, 2GB RAM, a 4500mAh battery, and an ARM Mali-400 GPU. On top of all that, we can also confirm that it runs on Android 4.2.2 Jelly Bean and includes Samsungs unique TouchWiz interface.

No information on release date or pricing just yet, however we do expect Samsung will announce the new Galaxy Tab 3 model shortly. 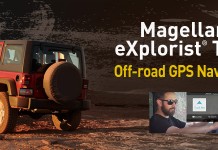 Navigate off road with the Magellan eXplorist TRX7