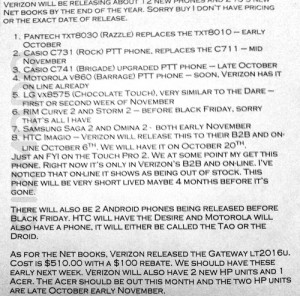 It didn’t take long to figure out what handset it was that Google CEO Eric Schmidt was holding earlier today.Â  An internal Verizon document making its way into the hands of Gizmodo tells us that it’s almost certainly the HTC Desire.Â  Based on the picture from earlier today, it appears to be nearly identical to HTC’s Hero and Tattoo.Â

Two Android phones are mentioned in the document alongside 10 other handsets, all due out by the end of the year.Â  The other phone listed on the sheet? It’s the not-so-secret Motorola Sholes/Tao/Droid.Â  We know the announcement is coming any day now so just sit tight and be patient, alright?Â  That’s easier said than done for a lot of you guys.

So which of you guys and gals plan on picking one of these phones up for yourself?