We mentioned last week that a mid-range take on HTC’s flagship phone was rumored to be in the works. Now thanks to Evleaks, we have leaked pictures as well as more detailed info on the possible device. 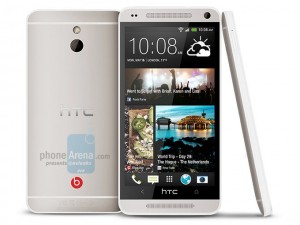 The smartphone, code-named the HTC M4 (remember, the One was code-named M7,) will feature a smaller 4.3 inch 720p display, an “ultrapixel” camera similar to the HTC One’s, a dual-core processor, 2GB of RAM, 16GB of storage, Android 4.2, and LTE connectivity. According to Evleaks, the M4 (with some manner of One branding of course,) is supposed to be nearly identical in appearance to its big brother, other than the idea that it may boast a “metal-alloy” chassis. With a smaller CPU and slightly trimmed down features, the M4 will also be placed at a lower price point for interested consumers.

If rumors are true, we should expect the M4 (or HTC One mini, or whatever they decide to call it) to be released sometime before the end of June. As soon as we receive more specifics on price and dates, we will make sure to let you know!