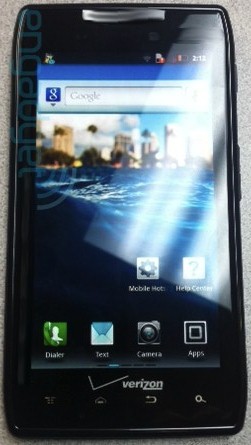 Newly leaked photos of a nearly finished Motorola Droid RAZR (aka Spyder) and Motorola XOOM 2 have surfaced, giving us a better idea of what to expect this coming Tuesday at the Motorola/Verizon event in NYC. The Droid RAZR now dons the Verizon logo along with some Kevlar reinforcement. Interestingly, the tipster who sent these pics to Engadget also informed them that the processor in the Spyder (Droid RAZR) was clocked at 1.5GHz, yet the final release is expected to be 1.2GHz (perhaps someone can work on that). While I don’t personally care for the design of the RAZR, I can’t wait to see how the qHD Super AMOLED display looks.

As for the Motorola XOOM 2, it appears that most of the bugs that have been plaguing earlier builds have been worked out, and I’m betting the XOOM 2 Media Edition gets announced at this Tuesday’s event as well (both have similar designs). We’ll know soon enough — but I’m betting the leaks aren’t going to subside, so plan on seeing them for the next couple of days.