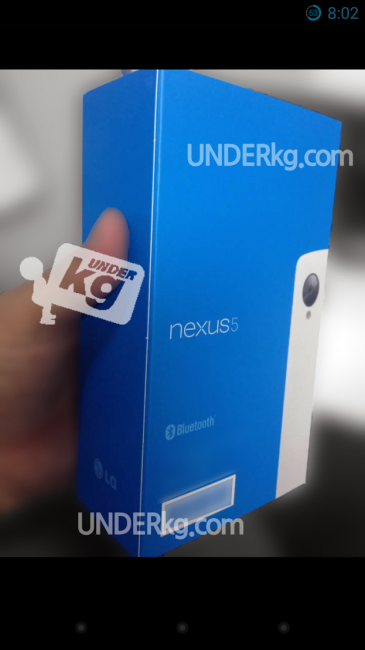 New photos obtained by tech site Underkg tell us that the Nexus 5 could potentially arrive in a white variant. The photos show what looks to be the retail packaging of the Nexus 5. You’ll notice that the back of the device appears to be white, something we’ve not yet seen in all of the leaked photos.

The retail box looks very much like the one that comes with the Nexus 7 2013 and feels pretty legit to us. With that said, the stark white bottom of the box does not show the regulatory details, FCC ratings, etc. It’s possible, however, that this is not destined for the U.S. market or that it was from a prototype.

We might be cautious to expect a white model on day one. Remember the Nexus 4 rumors which said we’d have one of those as well? We did, but not in the manner in which we had hoped. Nevertheless, we’re keen on options and think the white could look good in our hands.