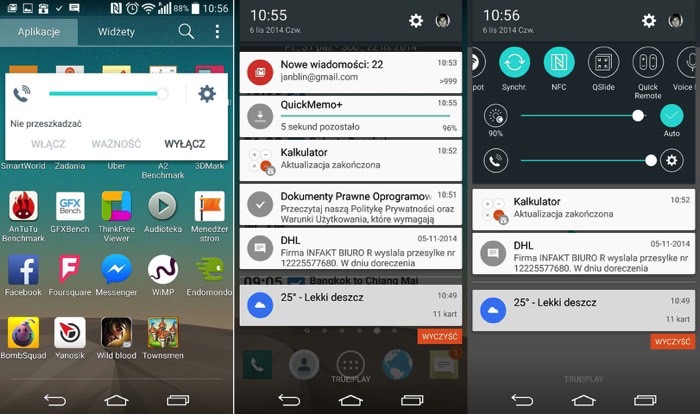 While questions about which devices are going to be receiving Android 5.0 Lollipop, LG users may not have to worry about anything. Even though Google has just released the source code, LG European branches are telling their customers that the LG G3, released earlier this year, will definitely be updated to Lollipop. If you’re one of those who picked up last year’s flagship, the LG G2, you shouldn’t worry either due to the fact that it’s reported that the G2 will also be updated to Lollipop.

The screenshots give us an idea of what LG is doing in regards to adding their take onto Android 5.0. The biggest change that we can see from the aforementioned screenshot, is the updated notification dropdown. However, it seems that the updated version of LG’s software will still be heavily laden with their own layout, with just touches of Lollipop spread around. It will definitely be interesting to see how everything plays out with how LG works Lollipop into their interface.

Even though stock images are being delayed due to Wi-Fi battery draining bugs, everyone can expect to see their devices updated within the next few weeks or so. Although the images have to go through their paces with the respective carriers for the Moto X 2014, we should still start seeing the roll-outs for those devices soon as well.

Are you excited to see Android 5.0 Lollipop on your LG G3 or your LG G2? Let us know in the comments below.