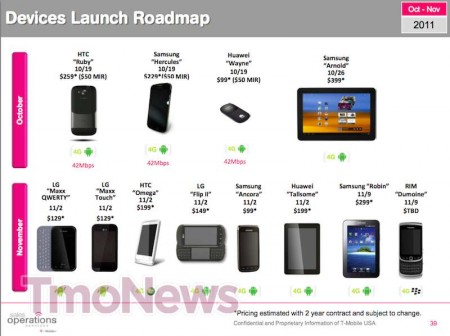 The T-Mobile roadmap for October and November has leaked online and, to no surprise, it has plenty of Android on the horizon. Aside from the stuff we’re already expecting (Amaze 4G, Galaxy S II), there appear to be enough Android smart phones and tablets to get us through fall.

A Huawei ‘Wayne’ should make its debut on October 19th, offering a lower cost alternative 4G phone with 42Mbps speeds.  At $99 with a contract, we can’t imagine the specs being high-end however we’re not complaining over the price.

One week later, a Samsung ‘Arnold’ tablet arrives on October 26th with a $399 sticker.  It doesn’t take much to figure out that this is the Samsung Galaxy Tab 10.1  that was recently announced.  Unfortunately we’re not going to get 42Mbps speeds in a 10-inch tablet just yet.

In the longer term (November 2nd) we have a pair of LG handsets, the ‘Maxx QWERTY and the ‘Maxx TOUCH’. These definitely look to be the two myTouch phones which surfaced but a few weeks back. Pricing appears to be $129 for both flavors, leading us to believe the rumored entry-level specs will pan out.

An LG ‘Flip II’ is also slated for November 2nd, bringing the unconventional sliding QWERTY with 4G connectivity to T-Mobile at a $149 price tag. Staying with that same, busy day, a 4G Samsung ‘Ancora’ debuts with a $99 sticker which is presumably an entry-level Galaxy series (W, Y?) phone.

Rounding out November 2nd, a Huawei ‘Tallsome’ is listed with a $199 sticker.  Putting two and two together, this should be the tablet that T-Mobile is rumored to unveil at CTIA next week. Previous rumors pegged a 7-inch Huawei tablet with a $200 price point (on contract) for the carrier’s October 11th announcements.

A Samsung ‘Robin’ is on the calendar for November 9th, likely bringing the Galaxy Tab 7.0 Plus to T-Mobile. Considering how the specs line up with the Huawei tablet we’re not surprised by the $299 price tag for this 4G device.