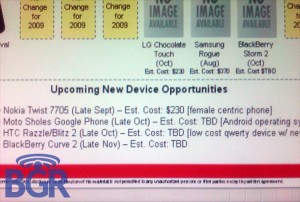 Yet another leaked carrier document found its way into the hands of Boy Genius Report.Â  This time, it’s the end of year releases for Verizon.Â  There’s some stuff about BlackBerry, LG, and Samsung in there but what we’re most interested is the Motorola Sholes which is shown with a Late October release.

Chances are good that when the phone comes out, it will feature the Eclair branch of Android.Â  Rumors peg that as Android 2.0 so we’ll should be in for a nice update should this pan out.

Head over to BGR for the other pics if you wanna see the rest!