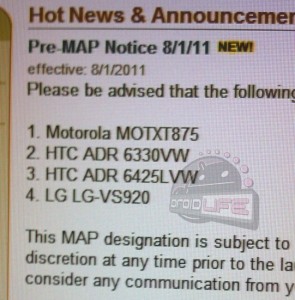 The next four Android handsets out of the Verizon camp look to be coming to a head, thanks to a leaked minimum advertised price list.  The MAP suggests that we can soon look forward to a pair of HTC handsets, as well as one each  from Motorola and LG.  Not everything here is new, but it does tie a few strings together.

Assuming this are in sequential order, the Motorola MOTXT875 (Droid Bionic) will be first out of the gate, followed by the HTC ADR6330. Nothing is known about this guy yet, but speculation suggests this could be the silver edition of the Droid Incredible 2.

The HTC ADR6425 figures to be the Vigor, a handset which has quickly become a hot topic in the Android space. Specifications for this particular model may include a dual-core 1.5GHz processor and a display with 720p resolution.

Rounding things out is the LG LG-VS920 which may join or replace the Revolution in some capacity. Considering the handset is but a few months old and already offered support for Verizon’s 4G LTE network, we’re not quite sure what to think here. Perhaps a model with a sliding QWERTY?