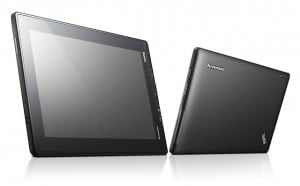 UPDATE: Please refer to this post for the official announcement from Lenovo.

Back at CES 2011, Lenovo introduced an amazing and very innovative tablet, the Lenovo LePad. It’s a hybrid tablet that dual-boots Android and Windows 7. Now it looks like Lenovo is about to launch another Android-powered tablet, as several images of an upcoming device appeared on their Picasa albums. Android Community is reporting that Lenovo is working on two tablets, the Lenovo ThinkPad and the Lenovo IdeaPad K1. The IdeaPad is supposedly an entertainment tablet, whereas the ThinkPad is for more mainstream business users. 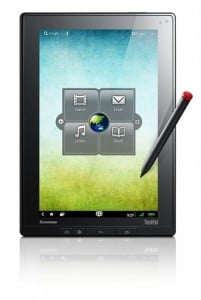 The ThinkPad features 10-inch display and is rumored to be running Honeycomb, with a custom Lenovo UI. There are 4 dedicated buttons,  miniUSB port, mini HDMI port, as well as both rear- and front-facing cameras. Interestingly enough, the photos show a stylus, much like the HTC Flyer’s Scribe pen. Perhaps Lenovo is looking to pick a fight with HTC in the tablet world.

So we don’t know what’s under the hood of this tablet but we’re expecting a dual-core processor. With that being said, who’s looking forward to Lenovo’s upcoming Android tablets? Share your thoughts with us in the comments below or on our Facebook Wall!