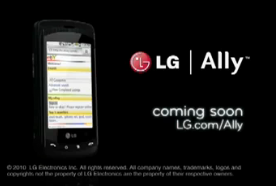 The first Android-based smart phone from LG to hit the US has gone from rumor to real deal in a matter of days.  We just found official confirmation showing May 20th as the release date for the LG Ally.  The handset manufacturer is gearing up for a full-on advertising blitz starting immediately.  Some of you may have noticed the new commercial over the weekend featuring 5 friends caught in the middle of a battle between Iron Man and some drones.

While we’re still waiting to hear the official word on specs, we know a little bit more about what LG has in store for the phone.  The Ally will come with an Augmented Reality application that works with an Iron Man comic book. Customers can enter a sweepstakes to win tickets to an upcoming Marvel movie, an LG phone, and other LG-related prizes.

An Iron Man-themed micro site, www.lgim2.com, is set to open any moment now and will include a film-themed game designed around Augmented Reality.  According to LG, the Ally is “the first Android device to boast an Augmented Reality application” downloadable at the micro-site.  For now, this app will be exclusive to LG handsets.  As we read through the press release we get the sense that the Ally is featured throughout Iron Man, which would make it a first for Android handsets.  We’ve seen other phones pop up here and there, but never in such a high-profile manner.