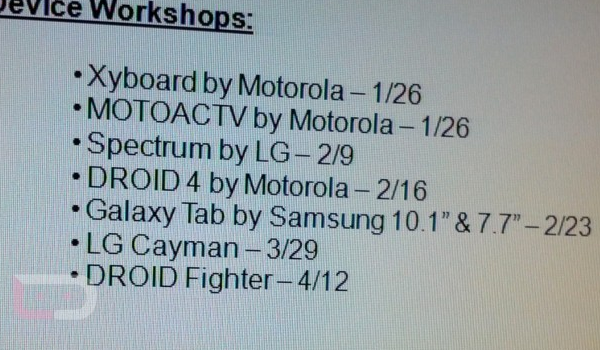 Two of Verizon‘s upcoming spring handsets have been leaked online, giving us a pair of new Android smartphones to look forward to seeing.  Thanks to the guys at Droid Life we now have a Droid Fighter and LG Cayman on our radar.

Given that we’ve just learned of the new models we don’t quite know what to expect out of them.  Generally speaking, Motorola tends to own the Droid branding on Verizon however there have been instances of LG, Samsung, and HTC.  With multiple new models expected across various OEMs at next week’s Mobile World Congress, it stands to reason that we’ve yet to see which device will be a Droid Fighter.

One model to consider for this moniker could be the HTC smartphone leaked a few weeks back.  Some may recall learning of the very Incredible-like form factor and Verizon 4G connectivity.  Could an HTC Fireball be the Droid Fighter?  Why not go with an Incredible 3?

Getting to the LG Cayman it’s even harder to guess which model is on the horizon.  As many of you know, LG has been on a tear lately, announcing one device after another.  Our gut tells us that it’s a quad-core Optimus 4X but we’ll find out soon enough.

Assuming that the “workshop” stuff is tied to launch dates, the LG Cayman is expected on March 29th with the Droid Fighter arriving April 12th.