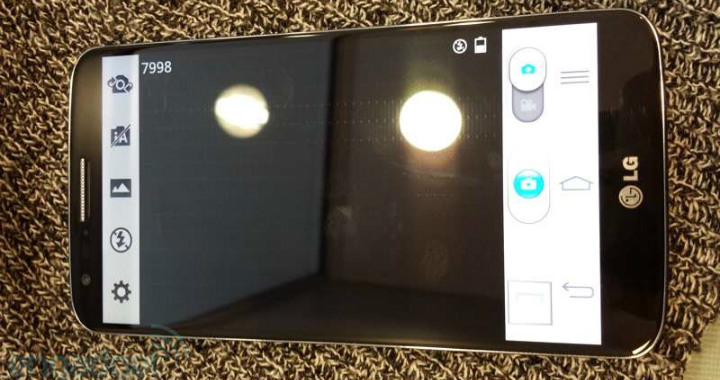 The team over at Engadget have just scored a handful of images of the upcoming LG G2 smartphone. Rumored (read: expected) for an August 7 debut, the handset is set to be LG’s flagship experience for the second half of the year.

The photos you see here show the phone as having a rather thin bezel and not quite edge-to-edge display. There are no physical keys on the handset; LG is going with the stock Android approach with software keys. Around back, yep, there’s the volume rocker sitting above and below the camera. That’s either the best place we’ve ever heard of or the absolute worst. Can you imagine the smudges that could happen as a result of adjusting volume levels?

See the rest of the photos at Engadget

The screen looks to be the 5.2-inch HD stuff we’ve heard recently and, truth be told, is stunning in these early photos. The overall design is reminiscent of the Nexus 4 and gets further from the old Optimus aesthetics — we love it.

According to Engadget’s source, this particular model was designed for Sprint’s network. We’ll go ahead and assume that at least Sprint and AT&T will be on board with the successor to the Optimus G. We’d love nothing more, however, to see it spread across all major carriers.

UPDATE: Here’s a nice, albeit short, video that demos the lock screen and a few quick toggles. The more we see out of the G2 the more we like it.