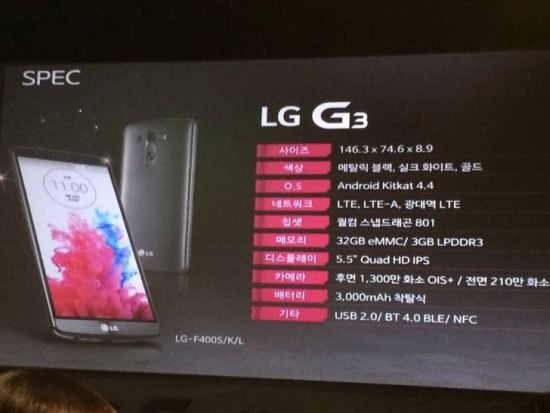 With but a few days to go before its debut nearly every specification imaginable has been spilled for the LG G3. This week we get more confirmation of previously rumored hardware details via leaked presentation slides.

As you can make out from the accompanying image, the G3 figures to include a Qualcomm Snapdragon 801 processor, 3GB RAM, 32GB internal storage, and 3,000mAh battery. Powered by Android 4.4 KitKat, the phone also looks to offer a 13-megapixel rear camera with optical image stabilization, 2.1-megapixel front-facing camera, and support for LTE/LTE-A.

Let’s not forget that this will be the first handset from a major smartphone maker to employ a 5.5-inch QHD display. Yes, that’s 2,560 x 1,440 pixels!

The LG G3 should be offered in three color options, white, black, and gold, and will likely have a home across many major wireless providers.