After winning the “Best New Smartphone” award (and 33 other awards) at Mobile World Congress 2016, LG is not standing still. Today they announced that the LG G5, as well as the collection of companion modules called “LG Friends” are coming to the US market in early April. The devices will be sold on all of the major carriers and retailers, which include AT&T, Best Buy, Best Buy Mobile Stores, B&H, Sprint, T-Mobile, U.S. Cellular and Verizon.

They’re called “friends” because they’re meant as extensions of the G5 while being easy to set up and connect. The VR headset is a stereoscopic piece light enough to wear comfortably. It connects to the G5 via USB-C cable and has a 1.88-inch IPS screen with a 639ppi pixel density. Most standard VR apps and games, such as those available for Google Cardboard, will work with LG’s headset, including the photos from the 360 Cam. 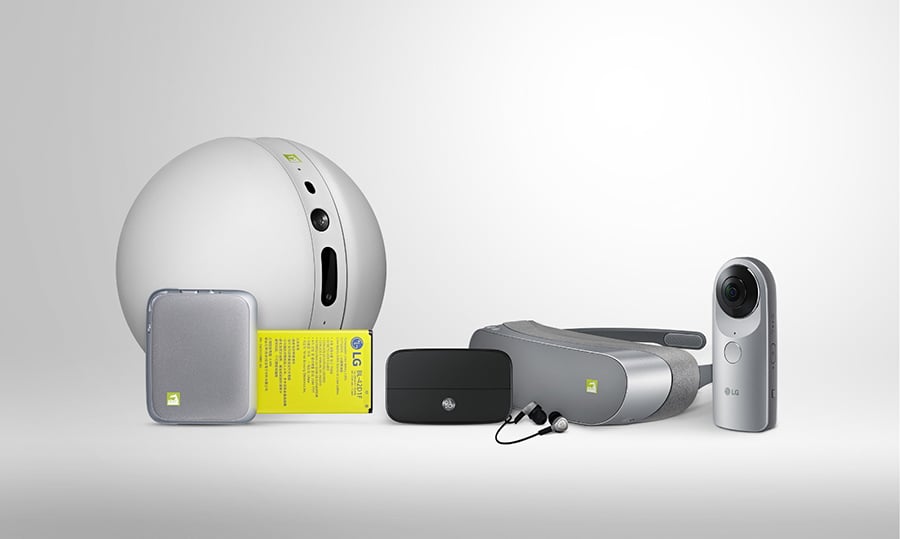 If you’ve ever wanted a robot pet, LG’s Rolling Bot is a good contender. Called a “drunken, headless BB-8“, it’s roughly the size of a bowling ball. The Bot can take 8 MP photos and videos of its own, which can function as a home security cam or by checking on your pets, as the Bot can stream the video via Wi-Fi straight to your G5.

The 360 Cam has two 13MP cameras and 4GB of local storage (with microSD support). The Cam also has three microphones to enable 5.1 surround sound to pair with the videos you take. LG makes it easy to upload your videos to YouTube 360 and Google Street View.

The main premise of the G5 is the modular design. LG hopes to entice customers by letting them swap the battery on the fly, adding a high-fidelity speaker, and attaching a camera grip. It’s up to customers to decide whether these modules are a gimmick, or if they truly add extra functionality to the phone.

For a limited time, LG is offering early adopters that buy the G5 a free extra battery and battery-charging cradle.

Note: The article was updated to provide more detail on the LG Friend devices.