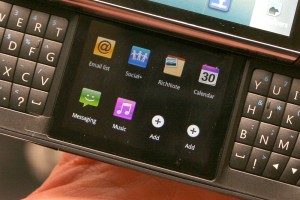 A new LG handset with T-Mobile branding and a unique form factor has been spotted in the wild.   There is no official name for the device yet but we have an idea as to what we’re looking at.  We’ll get to that in a moment.  This phone was spied at a London event where Orange and Kineto Wireless were chatting up Kineto’s Smart WiFi solution, the source behind Orange’s Signal Boost technology.  You Yankees might be familiar with their Wi-Fi calling service for T-Mobile USA, announced back in the fall.

We’ve not yet seen this form factor on Android and we’re kinda digging it.  There’s a space between the left and right half of the keyboard where 8 shortcuts to applications are nested.  As it appears, six of them are predetermined but users can choose the last two.

According to Pocket-Lint, the handset is “hefty” and may not be ready for production, adding that it didn’t have the tight  lines found between other sliding smart phones.  They likened the spacing between halves as being similar to a burger.   Further, they note that the camera’s resolution is not indicated on the back, something LG normally does for products.  Pocket-Lint has a gallery of images for this phone should you want to get a better look.

The screen display was not quite as sharp as other higher-end LG offerings, but we wouldn’t expect top-shelf stuff here.  Considering all the recent chatter around the LG Gelato and/or Optimus Slider, we’re inclined to believe this may what LG is about to offer across multiple carriers.  Much like last year’s Optimus One, this is likely a low-cost Android phone designed to appeal to consumers upgrading from feature phones.

Unfortunately, we may be waiting to hear much in the way of official news as the Optimus Slider is not due until mid-September.  T-Mobile is also rumored to be offering a Maxx and Maxx Q in November, presumably in touch only and QWERTY flavors.  Regardless of name, we can still see LG giving each carrier some love here.