Yesterday LG unveiled the Optimus line of Android devices which they claim will highlight the company’s ability to produce devices that “tame consumers’ information-dominated lives.” The Optimus line will feature ten new Android devices, one of which will be a tablet. It was previously mentioned that LG hopes to release a total of twenty Android phones in 2010.  This would certainly go a long way to making sure that happens.The Optimus One, which looks oddly similar to the Motorola Cliq XT, will feature a 720MHz OMAP3630 processor, a 3.8″ screen and an HD-capable camera. LG did not mention whether the Optimus One would be the headliner of the Optimus series.

From the images provided in LG’s press release, both the Optimus One and Optimus Chic feature a lightly-modified launcher with a bottom dock that shares styling cues with the dock found in HTC’s Sense. The Optimus Chic is the more aesthetically pleasing of the two devices, and if BGR’s statements are correct, LG decided to make the Optimus Chic, and not the Optimus One, an entry-level device. No release dates were provided, but all phones in the Optimus line will ship with Android 2.2. LG declared that “[it] prioritizes consumer choice as a key strategy for expanding its footprint in the mobile industry”, so hopefully one of the remaining eight devices in the Optimus series will be able to compete with recent offerings by HTC and Motorola. 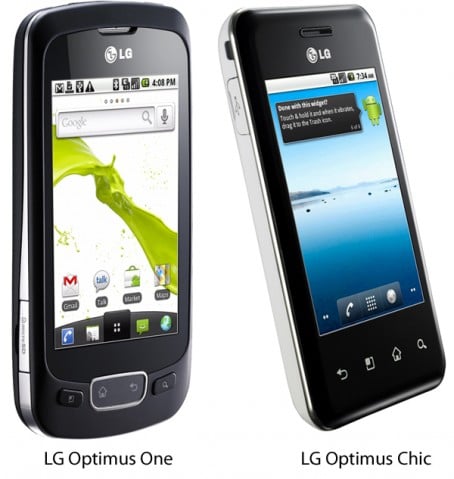 Please remember to participate in the AndroidGuys Paid App Pledge. By pledging to spend $5 per week on Android apps, you help developers to see that creating quality apps for Android is a worthwhile endeavor.