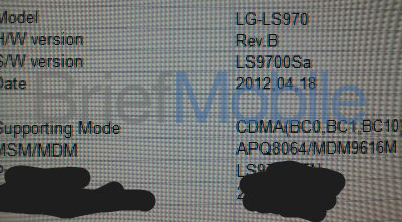 LG is known for its scoops: They were the first with a dualcore phone, the first with a 3D phone and they’ve done it yet again. Although the software leaves us wanting something better most of the times, we have to say: Using a quad core krait processor promises some pretty darn impressive (benchmark) results.

Having four cores doesn’t tell the full story though: Why would this chipset, the MSM8064 be any better than the Tegra3? Well: It uses a brand new GPU, the Adreno 320, the Krait architecture is bloody fast and the manufacturing process is 28nm which means there is less powerconsumption and heat generation.

The leaked specifications list also promises 16 Gigabits of RAM, which translates to 2GB. The resolution is 1280×768 on a 4.67″ screen, on par with the Galaxy S III and the Galaxy Nexus.