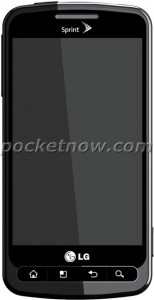 LG is one of the leading mobile phone companies in the world and in the United States; all 4 major carriers are offering LG Android devices. They brought their mid-range LG Optimus One which was launched by T-Mobile, AT&T, Verizon and Sprint, and also T-Mobile, AT&T and Verizon launched high-end LG Android device. Earlier last month, we heard that Sprint will be launching LG Optimus Slider on September 11th and now we have a good idea as what it looks like.Pocketnow got their hands on first render image of the Sprint bounded LG Optimus Slider and the phone looks sexy, no? It is said to feature a sliding QWERTY keyboard however it’s not unveiled in the image above.  Is it just like that T-Mobile device having a secondary display on it or just normal and traditional keyboard? This is the question which will probably be cleared on September 11 when the Gelato devices are expected to arrive.