LG has started sending out invites for an event on October 1st. The invite features a film reel and a slate board asking you to save the date for October 1st in New York. Generally, companies try to tie in some sort of element from their presentation into invite, but we haven’t seen any leaks having to do with movies. 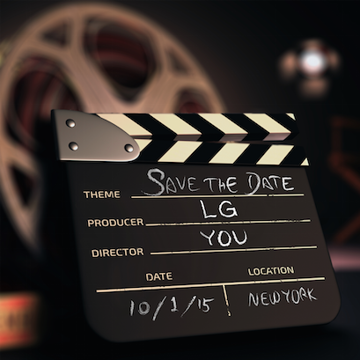 We have, however, seen a lot of leaks for a new flagship phone from LG. Whether it’s called the LG G4 Note or the LG G4 Pro is yet to be seen, but we did catch a trademark filing for the G4 Note earlier this month.

There haven’t been a ton of hardware leaks on the G4 Note, but we might be seeing a very similar phone to the G4 that was released earlier this year. It’s probably too early in the year to see a newer processor, and 3 gigs of RAM seem to be the sweet spot right now. If they follow Samsung’s example, we’ll probably see a stylus of some sort too.

What do you think LG will be showing off? A new phone? Maybe a new watch? Let us know in the comments how you think the film theme may play in.