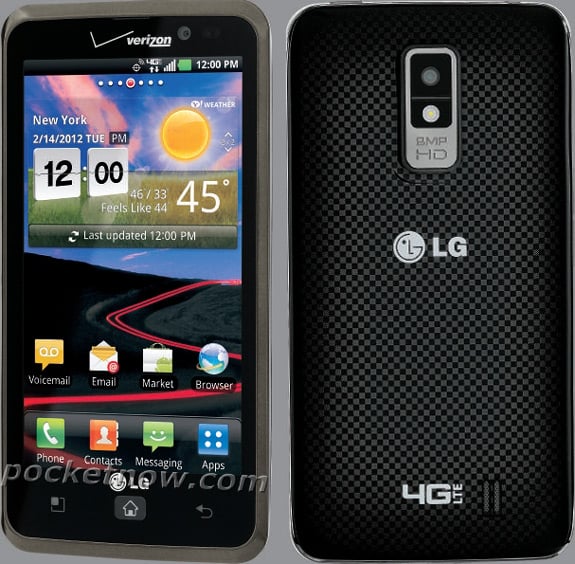 A few days ago, we showed you the first leaked render images of LG Spectrum, the rumored successor to the LG Revolution. Well, the leaked shots weren’t very clear, and we didn’t get a clear look at the device. But now our friends over at PocketNow managed to get their hands on leaked shots of it, and this time they got some clear and official render images along with some specifications.

Spec-wise, the phone will feature a dual-core 1.5 GHz Qualcomm Snapdragon processor, a 4.5-inch 1280×720 HD touchscreen, an 8MP rear camera with 1080p HD video recording, a front-facing 1.3MP shooter, 1 GB of RAM, 4 GB internal storage, a microSD card slot, HDMI out, LTE, and a 1,830 mAh battery. The device is said to run Android 2.3, and will (hopefully) be updated to Ice Cream Sandwich a few weeks (or months) after the launch. The phone will also be able to create a 10-device LTE hotspot, which is a nice touch.

Overall, the LG Spectrum is a nice device, and it’ll be joining the ranks with the Droid RAZR, Galaxy Nexus, and upcoming Droid 4. More on this as it develops.

Anyone looking forward to picking up this device? Tell us about it in the comments below!