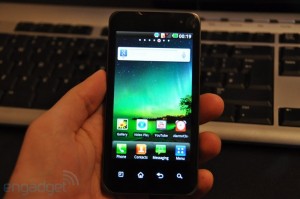 Recently Engadget was lucky enough to get their hands on the currently unreleased LG Star. The LG Star is one of the Dual Core Tegra 2 devices rumored to be released early next year. The Star has been no stranger to the camera since it was first leaked a few months ago, so this doesn’t come as too much of a surprise. The device is still in the early stages as far as the software is concerned and at times performed as such. It currently has Android 2.2 running on the device but I wouldn’t be surprised if by the time the Star is available it is running 2.3 as LG has already committed to putting Android 2.3 on their lower end Optimus One line-up of phones.

As far as the hardware is concerned, it looks to be just about finalized. The Star sports a 4″ display, however it doesn’t look to be a Super AMOLED display, rather it looks to be a LCD display. It has a 8MP camera on the back and a front facing camera with an unknown quality (probably VGA), and also sports a mini HDMI port on the top of the device. But the big seller with the Star’s hardware is the Dual Core Tegra 2 processor that is under the hood. Engadget seemed to be very impressed with the overall speed of the Star, and the benchmarks seem to back that up crushing current devices in almost every category. Results like this are very impressive considering it is running with unfinished software.

It looks like the Star and LG will have a definite roll to play in the very exciting upcoming year. Look for the LG Star to be officially announced at CES in January.


Via [Engadget]
Note: Select outbound links may include affiliate tracking codes and AndroidGuys may receive compensation for purchases. Read our policy.