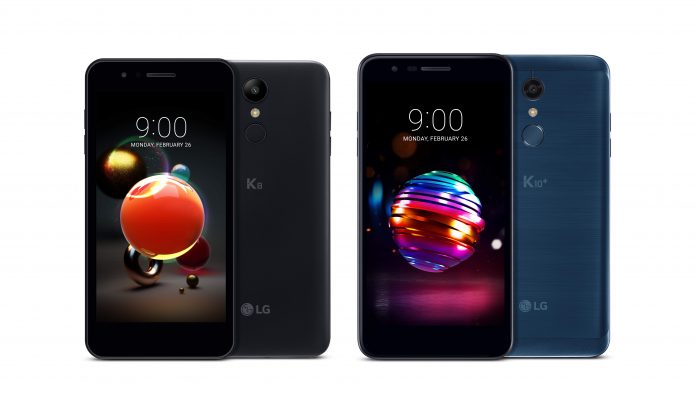 LG confirmed that it will unveil the K8 and K10 at Mobile World Congress 2018 next week in Barcelona with advanced features that it says will rival premium flagships.

Both models will roll out globally in key regions such as Europe, Asia, Latin America and the Middle East. The new K series focuses on advanced camera features such as high-speed autofocus and noise reduction for better performance in low light conditions. Both the K8 and K10 feature a 2.5D Arc Glass design and will be available in Aurora Black, Moroccan Blue, and Terra Gold.

The LG K10 comes with a 13-Megapixel camera which is the same as found in the LG G6, despite being aimed at the mid-range price tier. The K10 is also equipped with Phase Detection Auto Focus (PDAF) which is 23 percent faster than traditional autofocus.

The LG K8 will come will some improved camera UX features new for the 2018 model that will offer better low-light performance. Low Light Noise Reduction feature and High Dynamic Range (HDR) look to provide the advanced features usually found on a flagship at an affordable price.

“LG’s 2018 K Series range of smartphones is focused on delivering even more value to consumers looking for the right device that fits their lifestyle and needs,” said Ha Jeung-uk, senior vice president and business unit leader for LG Electronics Mobile Communications Company. “We’re confident we can capture the hearts and minds of consumers in the fast-moving market with our smartphone camera technology and other convenient features.”