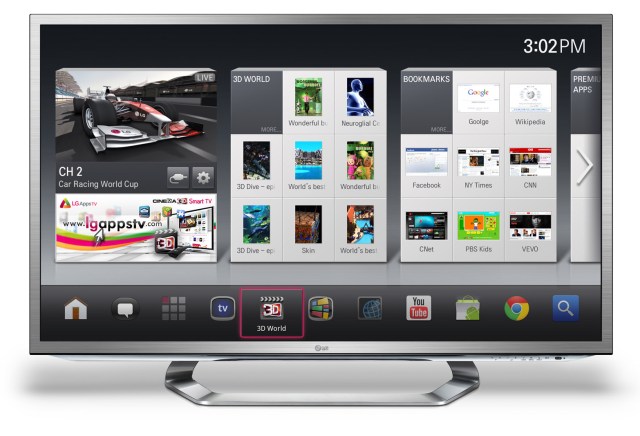 It’s a rather unarguable fact that, when Google TV launched at the end of 2010, it didn’t quite make the impression that Google had intended. Indeed, a lot of reviewers wrote the initial product off as half-baked, which was somewhat true; this was their first outing, after all. And while the Google TV product line has picked up a bit of steam (and positive media exposure) as of late – particularly after its huge software update, it still hasn’t quite “made” it. Well, LG is hoping to help push the service into the “successful” region with its new Google TV television, set to be announced at this coming CES. Beyond the obvious Google TV software on board, LG’s new set is going to be rocking 3D (courtesy of the non-battery passive technology glasses tech, rather than the heavy battery-bearing active glasses type), which will probably please a few people. Nothing was mention regarding size, so hopefully there’ll be a few options there. Check out the press release after the break, and be sure to let us know what you think in the comments.

Equipped with LG’s own CINEMA 3D technology, LG Google TV provides a home entertainment experience that is immersive, comfortable and convenient. Based on LG’s own Film Patterned Retarder (FPR) technology, CINEMA 3D glasses are battery-free and lightweight. The glasses are also very affordable, making LG’s Google TV ideal for viewing by a large group of family and friends when used in 3D mode. And with a single click of the remote, any 2D content can be viewed in 3D, thanks to the built-in 2D to 3D conversion engine.

LG Smart TV with Google TV will be available in two series at launch in the US in 2012.  The first demonstration of LG’s Google TV will take place at CES, Jan. 10-13.

*Internet connection & certain subscriptions required and sold separately. Content and services vary by product and are subject to change without notice.