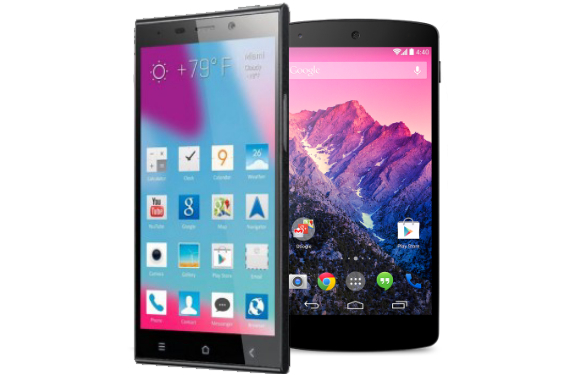 I originally made the jump from the Galaxy S 4 to the Nexus 5 as a result of my love for AOSP based ROMs. I felt it was silly for me to pay a premium for the Samsung badge since I wasn’t using any of Samsung’s native features, and I’ve never been happier with a phone than I am with the Nexus 5.

All Shapes And Sizes

There’s been a flurry of new devices this season from HTC, Samsung, Sony and LG. In doing reviews for these I’ve seen most of the different ways that a manufacturer can mess with the look of Android. Even though I much prefer to look of the stock Android on a Nexus, the thing I’ve really come to love are the different settings and options, and I’ve truly begun to appreciate each manufacturer for the features at which they excel.

Enter the Life Pure Mini, the first Blu device I ever reviewed. This little device, taking all things into consideration, was the best experience I’ve had with a smartphone which I didn’t root to tweak everything to my specific tastes. The only detail that would turn most people off is that the device doesn’t have LTE. Not me though, in my time with it, the lack of LTE combined with an above average battery (3,000 mAh) running only a 4.5 inch display, the increased battery life resultant from the lack of LTE radios became one of my favorite “features” of the mini.

Of course it doesn’t hurt that I use T-Mobile, who has the fastest HSPA+ network, so there isn’t really a functional difference in the LTE and H+ speeds. I see 15 down on a slow day, but have seen H+ download speeds as high as 37 Mbps here in Canton. Since that’s pushing the high end of my home broadband connection, I’m not suffering without LTE.

One result of gaining an appreciation for devices in any form, has been getting over my Nexus purist distaste for OEM skins. The main thing I miss when using other devices is the Google experience launcher with quick access to Google Now, but losing that is a small price to pay when you find a device which in its stock state has the kinds of features you want from your smartphone.

Like the company who produced it, this device has captured my heart because it’s so leading edge in so many ways. Most notably, the 3 GB of RAM, the 16 megapixel rear and 8 megapixel front cameras put this device ahead of the pack. Having my first baby on the way in a few short months certainly increases the appeal of the great camera, and the attention to detail with the plethora of options available in Blu’s camera app. I want to make sure I have good quality photos of the coming moments in life.

The 3 GB of RAM was such a good choice as, in my opinion, it sets the device head and shoulders above the current flagships like the GS5 and M8. The Snapdragon 800 processor might not be the absolute latest version, but after having used a Nexus 5 which sports the 800 and both the GS5 and HTC One M8 which run on the 801, I must say, there’s not a noticeable difference in the performance in my usage.

The Snapdragon 801 is certainly not a big enough improvement over the 800 to make either of those skinned and bloated devices faster than the N5, but I’m sure there is some area in which the 801 would win out over the 800, it’s just not an area that affects my daily usage.

Up until recently I didn’t care much about the quality of the camera on my phone, but after the exercise in futility of attempting to introduce the novelty of a digital camera into our lives, we found that it was never worth taking a second device when we’re already going to have our phones everywhere, current camera-phones do just fine, and have a direct line to upload any photos to our preferred social and sharing media. I’ve quickly gave up and resigned myself to needing a good camera on my mobile device.

Most people would sniff when hearing that a device in the sub $400 price range is sporting a 16 megapixel camera, and dismiss it saying the quality won’t measure up to Samsung or Apple’s smartphone cameras in the same weight class. But the proof is in the pudding. The technology behind the 16 MP shooter in the Life Pure XL is truly professional grade. With a 1.34 µm pixel size compared to what is the best smartphone camera I’ve had the chance to use, the Galaxy S 5 which shoots at 1.12 µm pixel size. That’s almost a 20% increase over the S5. If you aren’t familiar with ultrapixels, here’s a Gizmodo article which may shed some light.

Let’s talk about the display. Ideally for my cell phone, I would prefer a display slightly smaller than the Nexus 5, the Life Pure Mini’s 4.5 inch screen is my ideal size, but there are no devices in that range available which meet my spec requirements. If I were using a device in my ideal size, I would then supplement my mobile with a tablet. But I’ve gotten to the point that if I’m not on the clock or working on a story, I don’t want to have to lug anything extra around with me.

Right now, the two mobile devices I use every day are the Nexus 5 and the Blu Studio 6.0 HD. The Nexus 5 as my phone and main device, the Blu as a my media delivery system. Ebooks, YouTube, games and web browsing are just a few of the things I find to be much more pleasing on a 6 inch display. I even prefer the size and form-factor of the Studio 6.0 HD to a traditional 7 inch or larger tablet.

The Life Pure XL comes right in the middle with a 5.5 inch full HD display at 400 ppi. A phone this size should be perfect to take the place of both devices I use. The battery is 2,500 mAh, and since the Life Pure XL does not have LTE, the battery life will be a refreshing improvement over the lackluster longevity of the Nexus 5’s 2,300 mAh. In a video playback loop test performed by the guys at C4ETech the Life Pure XL lasted 9 hours on a single charge, this is truly impressive and you would be lucky to get half that on a Nexus 5.

I know that if you’ve made it this far in the article, you’re probably thinking; “Okay Tony, so you like the Life Pure XL, but why actually make the switch?” The answer is simple: I love Blu. The way they do things, their prices, and everything about the company. They just have an all-around different vibe than any other manufacturer with which I’ve done business. They’re a relatively small company out of Miami, operating in a eighty thousand square foot facility where they do everything aside from manufacturing (which is done overseas.)

At the Blu HQ in Miami they conceive and design the devices, software, and features. After the products are produced and they get the finished units, packaging and distribution are both handled at the same Florida facility. I love Blu for making their play to shake the wireless industry. The US mobile market desperately needs companies like Blu to come in and change the way consumers think about buying cell phones.

My main goal with switching from the Nexus to the Life Pure XL full time is to show other people in the Android community that these devices from “the little guy” are a totally viable, and it most ways a preferable alternative to the big time OEMs. I’ve slowly switched all of my loved ones over to the T-Mobile network because I love the way they do things and I want them to succeed. Now it’s time to start switching them into Blu devices as well.

Want one? Take your pick!