Even though the NFL and the players can’t come to an agreement, the NFL downloadable app to your VZW device is alive and kicking! It’s jam-packed with all the NFL information a junkie could crave.

Complete coverage from NFL Mobile will take you all the way to the 2011 NFL Draft, which takes place at Radio City Music Hall in New York City.  It all starts on Thursday, April 28, 2011, and goes through Saturday, April 30. Live draft tracking and access to draft pick analysis from NFL experts, as well as video highlights from Prospect pages showing you the players becoming “Big Boys” and heading to the NFL, are just a couple things you’ll find in the mobile app.

When the draftees are notified by phone, so are you.  Every pick, trade and update of the 2011 NFL Draft is on your phone.  From the teams at the podium to the teams on the clock, you’ll hold it all in your hand with NFL Mobile’s real-time Draft Tracker and notifications. Verizon Wireless 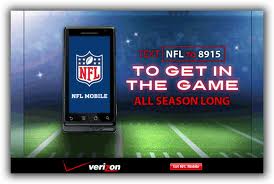 If you’re a football fanatic and would like everything delivered ASAP, text NFL to 8915 from your VZW device to grab this app. How many people are excited for the Draft this year?