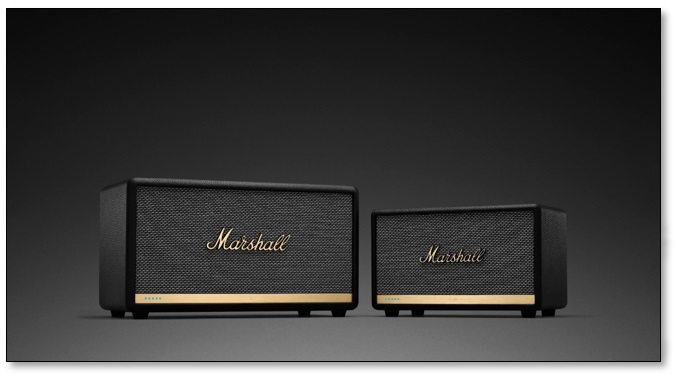 Marshall is mostly known for being the amp of choice for the majority of rock musicians. But did you know that the company recently entered the smart speaker market?

Present at IFA 2018 in Berlin this week, Marshall unveiled two smart speakers that offer Amazon Alexa control. The Acton II and its larger and more powerful brother the Stanmore II are part of Marshall’s Voice lineup of speakers. But they are the first to bring Alexa into the equation.

The speakers feature Marshall’s signature look and iconic logo on the front mesh. It’s not too original, but it’s the sort of timeless design that will most likely find a fit in most homes.

Marshall enters a new niche with its latest products

Marshall says the two audio devices will launch this fall with Alexa on-board. So you’ll be able to ask Amazon’s AI assistant all about your favorite bands and songs. But the company also plans to add Google Assistant support later this year, so customers will have the chance to use the assistant they like best.

Details on the technical specifications are currently pretty scarce. But the company did reveal that the two new Voice speakers take advantage of class D amps and custom drivers to provide a “balanced and dynamic response”.

If you like the idea of getting a Marshall smart speaker for your home, then let us tell you the Stanmore II is already available for pre-order for $399, with deliveries starting on October 2. While pre-orders for the Acton II will start on October 2 for $299, with availability on November 9. The devices will first be available in the US, then launch in other markets as well.

At IFA this week, we saw a lot of new speakers arrive. For example, Soundcore unveiled a party speaker called the Flare S+ which is far more affordable than the Acton II or Stanmore II. But if you want to bring the rock star vibe into your home, you’ll definitely look into Marshall’s direction.