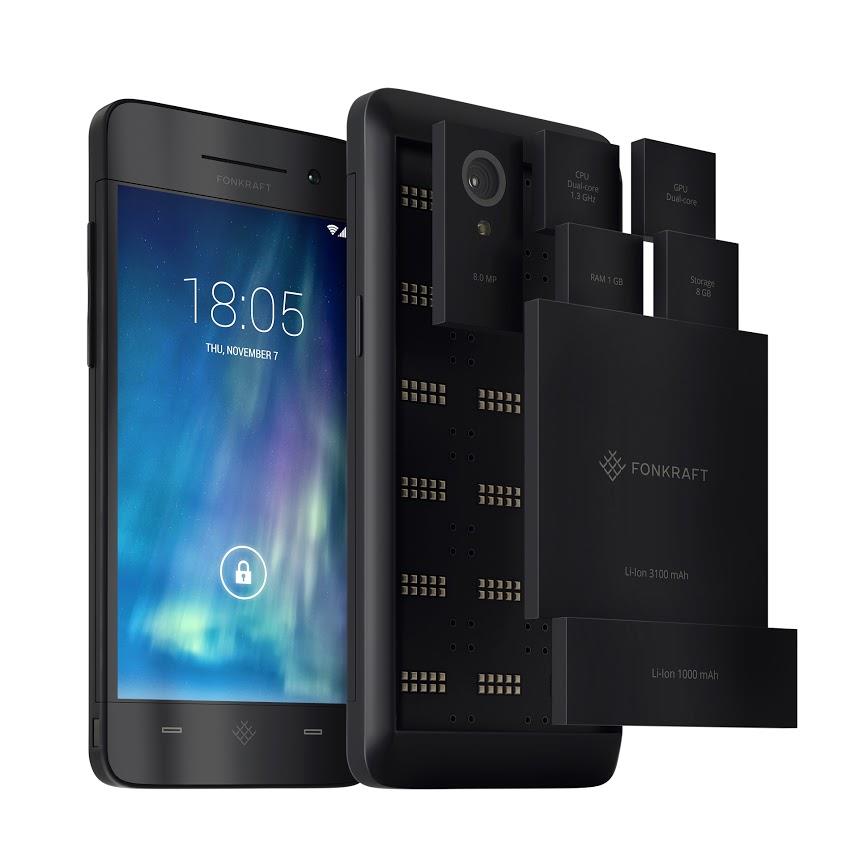 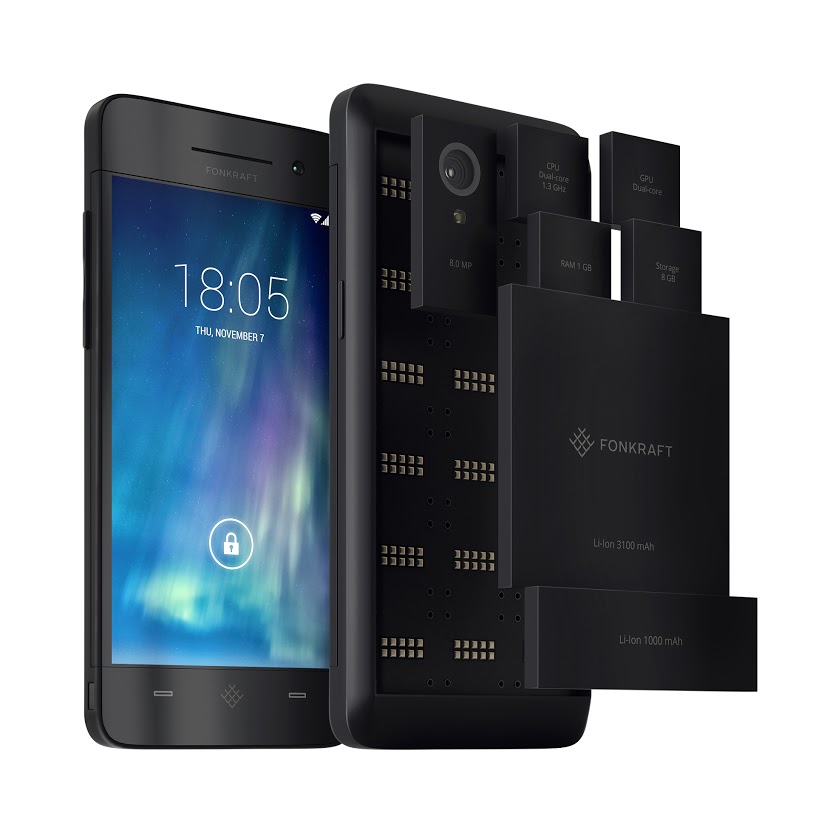 Update: Fonkraft Technologies campaign has since been removed, but the company is still active. According to its site, Indiegogo’s Customer Happiness Team did so because it believed it was “too risky to continue raising funds through Indiegogo.” However, it must be known that this was not because of accusations of fraud by Indiegogo or any of the supporters. All 320 backers of the previously successful campaign have since been refunded completely. In addition, Fonkraft refunded any claims that were made prior to its campaign’s cancellation. As of this update on June 2, Fonkraft Technologies is considering alternatives and states it does not expect to ship at the original launch date of September 2015. While its campaign is no more, you can donate to the company’s PayPal address: [email protected]

Earlier today, Fonkraft Technologies revealed information via its Indiegogo campaign of the world’s first crowdsourced modular smartphone, the Fonkraft. Here is a YouTube video about the device.

The front of the device’s chassis has a 5-inch display, which is slideable once a mechanism is activated. With the screen off, pins and mountings for the phone are exposed. This is true also for the device’s back. You can see where the modular part comes in. Here, these pins and mountings on the device and the individual modules can be attached together. The pins provide the electric signals, and the mountings allow the modules to stay secure, even during impacts or falls.

Fonkraft Technologies realizes having so much customization can be confusing for some users. Therefore, it has preconfigurations that consumers can choose from.

First, there is the $99 Fonkraft Pilot, which the company has as its budget-friendly configuration. It is built with battery life in mind. In standby, it can last for up to 550 hours, and users can get up to 30 hours of talktime and up to 90 hours of music playback. 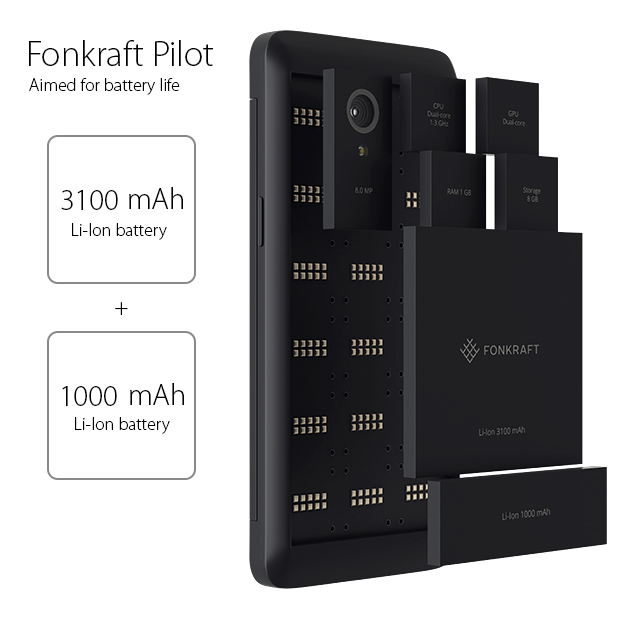 The $199 Fonkraft Resolution comes equipped with a 20MP camera-module that the company says allows for professional shots with its sophisticated optics. In addition, it has a 64GB module for storage to allow for many such photos and other files, of course. 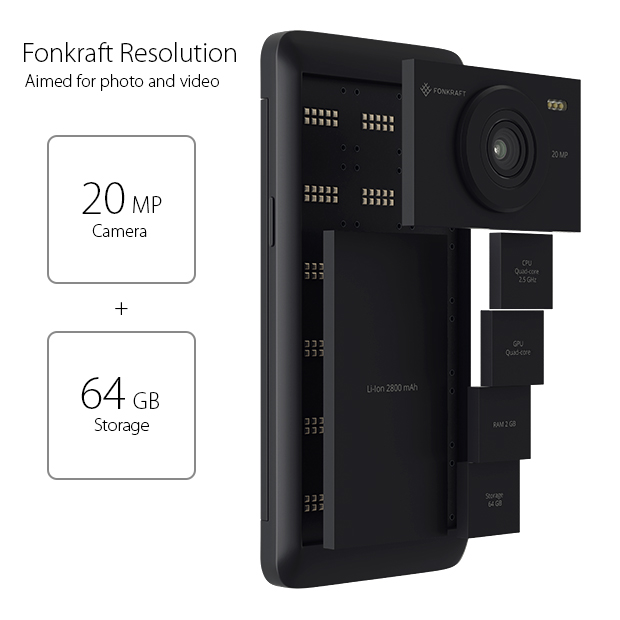 Next, the $199 Fonkraft HiFi comes with a 192kHz HiFi module made out of wood for high-fidelity audio playback. It also has a 64GB module to hold many lossless files. 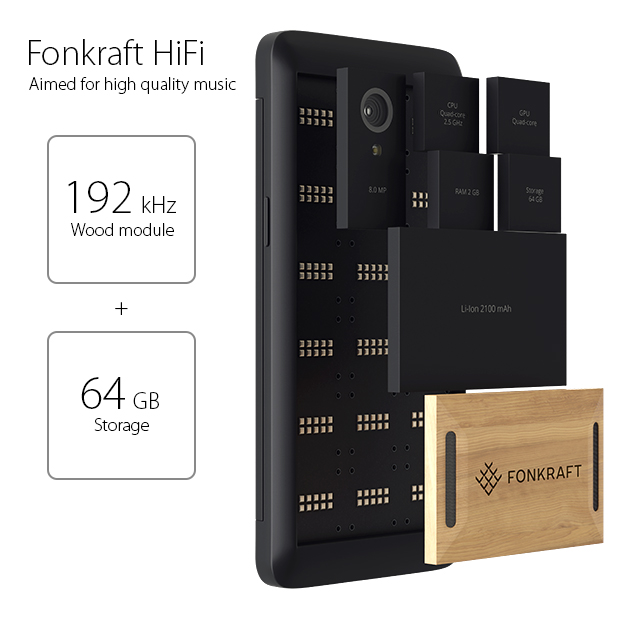 Finally, we have the Fonkraft Elements for $299. It includes all of the modules of the three aforementioned smartphones that you can use to mix and match with the chassis. Fonkraft Technologies states that it currently is developing new modules and configurations for the future, as well. 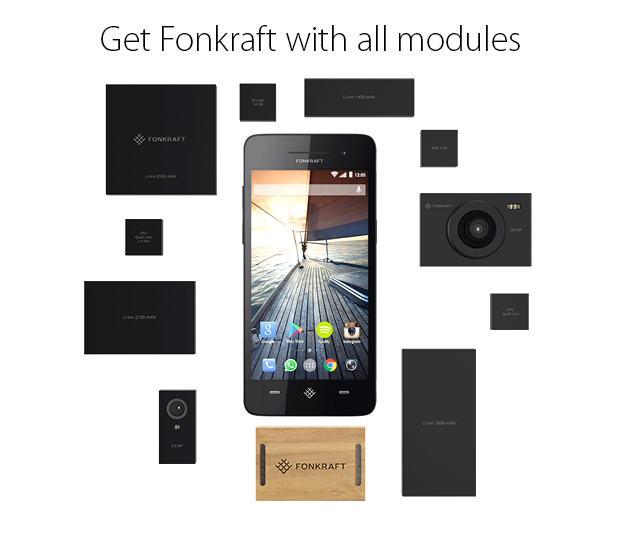 Here’s a table listing the specs between the Pilot, the Resolution, the HiFi, and the iPhone 6. 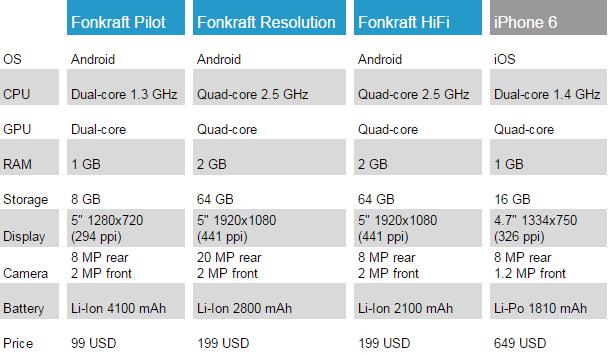 You can pre-order the Fonkraft now from the Indiegogo campaign link above.