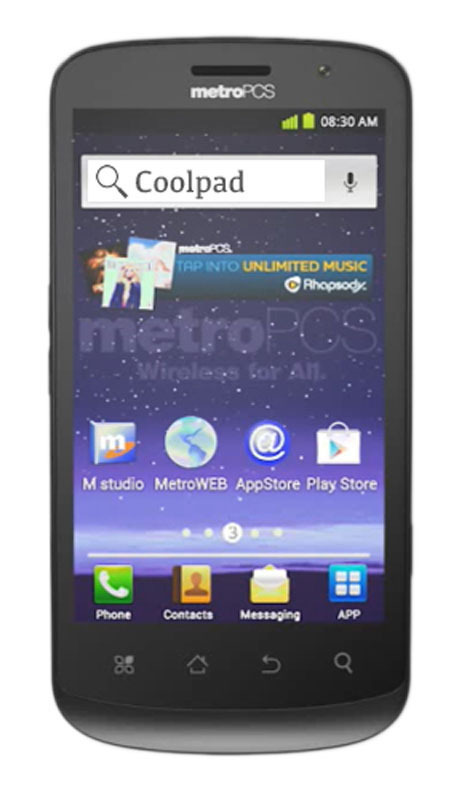 MetroPCS today announced yet another affordable 4G LTE Android with the debut of the Coolpad Quattro 4G.  As the second smartphone of its kind to cost less that $150, the handset runs Android 2.3 Gingerbread and features a 1GHz processor.  Additional details include a 4-inch touch display, a 3.2-megapixel camera, front-facing VGA camera, and your standard fare of connectivities.

For a limited time, those looking to pick one of these up can get a $50 mail-in rebate on the second of any two 4G LTE handses.  At this rate, the Quattro 4G would be $99 plus tax.

DALLAS – (August 28, 2012) – MetroPCS Communications, Inc. (NYSE: PCS) today announced the availability of the first U.S. smartphone from new handset partner Coolpad Americas – the Coolpad Quattro™ 4G.  At $149 plus tax, the Quattro 4G offers another option for MetroPCS customers who are looking for a feature-rich, affordable 4G LTE Android™ smartphone and can be used with MetroPCS’ 4G LTE service plans starting as low as $40 per month – with all applicable taxes and regulatory fees included and no annual contract.

The Coolpad Quattro 4G is an affordable 4G LTE smartphone powered by Android 2.3 (Gingerbread) and 1 GHz processor. The Quattro 4G has a 4” touchscreen that is perfect for viewing captured content, browsing the web and enjoying multimedia.  Consumers can use the phone’s 3.2 megapixel rear and VGA front-facing cameras to capture pictures, record video and video chat with friends and family.

For a limited time, MetroPCS customers can receive a $50 mail-in rebate on the second of any two 4G LTE handset purchases, meaning a new Quattro 4G is available for as low as $99 plus tax. Consumers can select from any of MetroPCS’ tax and regulatory fee-inclusive 4G LTE service plans, which range from $40 to $70 per month, including the current promotional plan of unlimited talk, text and 4G LTE data for $55 per month for a single line and $50 per line with a MetroPCS family plan.