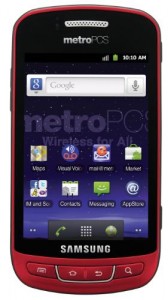 MetroPCS announced early this morning that they will be soon offering the Samsung Admire as part of a back-to-school shopping promotion.  The carrier stopped just short of giving a price and actual launch date but did say that it would be the ” perfect choice for first-time smartphone users or for budget-minded students.”  In other words it’s going to be a low-cost entry into Android.

Specifications for the Android 2.3-powered Samsung Admire include a 3.5 inch display, a 3.2-megapixel camera, and support for Bluetooth, Wi-Fi, and GPS.  Cellular South recently announced they would be soon providing the same device and also opted not to price the phone just yet.

MetroPCS has a number of other Android smart phones being offered with promotions including the Huawei M835, Samsung Galaxy Indulge, and LG Optimus M.  In addition to that, the carrier has a buy-one-get-one deal which helps customers save additional money on multiple purchases.