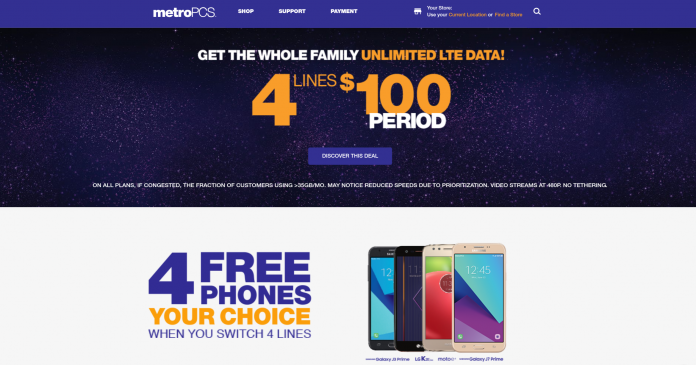 MetroPCS unveiled a plan with 2 lines of unlimited 4G LTE data, talk, and text for just $75 a month a few weeks ago; however, the T-Mobile-owned MVNO is not finished yet.

MetroPCS is now back with an even better deal: 4 lines of unlimited 4G LTE data, talk, and text for just $100. For those keeping score, that’s double the lines for just $25 more.

The new MetroPCS four-line unlimited promo comes with some important caveats. For starters, and as is the case with most wireless carriers, expect to have video streaming at just 480p, with reduced speeds in heavy web congestion. Next, users who consume over 356GB monthly will find their speeds reduced due to the prioritization of other customers. Few use this much data each month, but just know that there’s a limit to “unlimited.”

MetroPCS is not only offering a competitive offer to rival other MVNOs and big carriers, but also gives another sweet deal baked in: for those that port over four numbers (one for each four-member family) to MetroPCS from another carrier, the MVNO will give switchers four free phones of their choice, such as the LG K20 Plus, Lenovo Moto E4, Samsung Galaxy J7 Prime, and the Samsung Galaxy J3 Prime.

Metro has offered two LG K20 Plus handsets to carrier switchers this summer, so those who don’t need four lines can inquire about this deal.

To be sure, there are more competitive unlimited data plans out there. Sprint’s promo earlier this year offered 5 lines with unlimited 4G, talk, and text for just $90, but of course, Sprint’s network may not appeal to you. Verizon may be the best national network of them all (the evidence speaks for itself), but you’ll end up paying $160-$200 monthly with Big Red’s new Unlimited plans.

MetroPCS says that this four-line promo is for a limited time only, meaning that as good a deal as it is, it won’t last forever. What’re you waiting for?