Michael Dell, speaking at the annual Dell World conference, had some less than flattering remarks for Android. In discussing the company’s mobile strategies and history, Mr. Dell indicated that Android has “not developed to the expectations” of Dell. Pledging support for Microsoft and Windows 8, Dell sounds to blaming the poor success of the Aero and Streak products on the OS and not the hardware. As we see it, average display technology and poor battery life could ruin any mobile experience, regardless of platform.

It’s quite possible that Dell never really wanted to sell a bunch of phones and tablets to begin. Steve Felice, president of Dell’s consumer division, indicated that the Streak, Aero, and Venue products were shipped in limited quantities in an effort to gauge “customer reaction and behavior.” Whatever the case, Dell hasn’t made that big of a splash in the Android world so far and I don’t see much in the future that looks to change things.

I suspect that many of you wouldn’t care if Dell decided to stop offering Android products altogether and focused on other platforms. We put the question out to our Twitter followers and found that some didn’t even know Dell used Android while others were quick to say ‘no’. 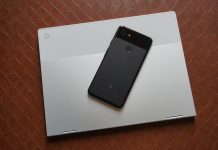 Chrome OS may be where the Pixelbook finally makes sense.