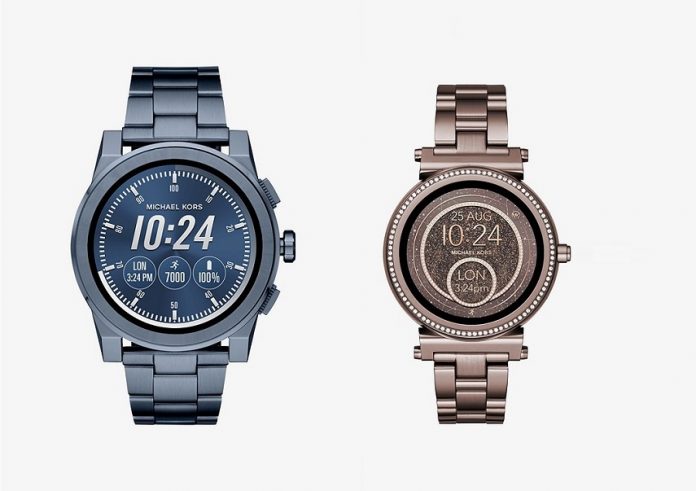 A few days ago we told you the already affordable ZTE Quartz smartwatch with Android Wear 2.0 is now available for purchase from T-Mobile with 75% off.

But if you have more money to spend and you’re looking for a more stylish Android Wear gadget, we recommend you take a look at Michael Kors’ new Access Grayson and Sophie which just launched in the US. You can grab one of these intelligent timepieces for $350 a pop.

The Grayson model aimed at gentlemen is available in Gold, Silver, Black or Navy colors, while the ladies’ version called Sophie can be purchased in Sable, Gold, Rose Gold, Silver and a Special Edition Silver.

The Grayson is obviously the largest of the two coming in with a 1.39-inch circular display with 454 x 454 resolution, while Sophie sports a smaller 1.19-inch one with 390 x 390 resolution. The two watches rely on 370 mAh, 300 mAh batteries respectively. Both include a rotating crown button that allows users to easily scroll through lists and menus.

On the inside, there’s not much difference between the two as they both rely on a Snapdragon 2100 processor, 512MB of RAM and 4GB of internal storage.

Given that these are Android Wear 2.0 smartwatches users will be able to download and install apps right on their wrist, without needing to have their smartphones around.

The two wrist-bound accessories also come bundled with My Social feature which allows users to pull an image from their Instagram feed and quickly create a watch face for their smartwatch.

However, the Access Grayson and Sophie lack advanced smartwatch features such as NFC, standalone wireless connectivity, GPS and heart rate sensor, so these products belong to the glamorous fashion tech category more than anything else.

But if you’re willing to ignore these shortcomings and have $350 to spare, the Access Grayson and Sophie are waiting for you on the official Michael Kors website.