Android Marshmellow, confirmed to be Android 6.0 (versus 5.2), is sure to bring many big changes to the Android ecosystem. One of the new features discussed briefly during Google I/O 2015 was something called Google Now on Tap. 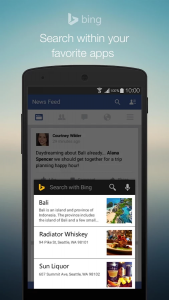 bring up a prompt to set a reminder to do just that. This is just one example of all that Google Now on Tap will be able to do.

This will change the way people use their smartphones, as it is just one step closer to having your phone be an actual smartphone. Alas, we must wait for Google to release this along with Android Marshmallow…

Unless you’re willing to use Bing, instead. Microsoft has updated Bing to enable you to use it much like Google Now on Tap will function. So it seems they beat them to the tap. Alright, that’s out of my system.

Dubbed “Snapshot”, Bing will tap (couldn’t help it…) into sources like Wikipedia, Airbnb, Lonely Planet, and more in order to bring you relevant information to what’s on your screen. Check out the promo video below

If you’d like to give Bing Snapshot a shot (okay okay I know I know…) hit the widget below. Let us know what you think.