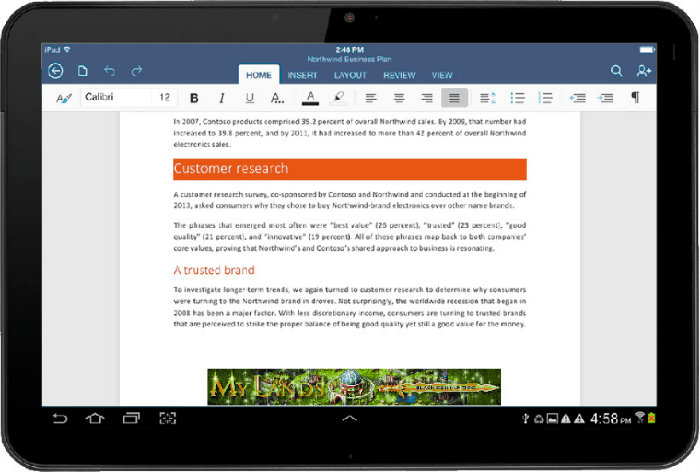 Microsoft has been mighty busy today. Earlier today, it was announced that Microsoft would be bringing Cortana to both iOS and Android, as well as the addition of a Phone Companion app for Windows 10 and the ability to stream music from OneDrive account via an updated Xbox Music application. Well now, Microsoft has announced that the suite of Microsoft Office applications will be pre-installed on select Android tablets.

Here is a list of the manufacturers of the tablets that have agreed to include Microsoft Office pre-installled are:

It’s also worth noting that Microsoft stated that the Microsoft Office suite WILL be available on a new LG tablet and Sony’s Xperia Z4 in the next 90 days. of course the specific tablet wasn’t mentioned, but there’s a little insight into what we can expect from LG in the coming weeks or months.

In March, we made access to Microsoft apps and services on mobile devices easier for customers by announcing strategic agreements with global OEMs Samsung and Dell, eight regional OEMs and top original device manufacturer Pegatron to pre-install Microsoft Office and Skype on Android tablets. Today I’m excited to announce that 20 additional global and local OEM partners, including LG, Sony, Haier, Positivo and Wortman, will make Microsoft productivity applications and services available on their Android tablets. These 31 partners will offer Android tablets pre-installed with Word, Excel, PowerPoint, OneNote, OneDrive and Skype in the near future. They will be available on a new LG tablet, and Sony will include them on their Xperia Z4 tablet in the next 90 days.

What are your thoughts on Microsoft Office being pre-installed on select Android tablets? Let us know in the comments below.