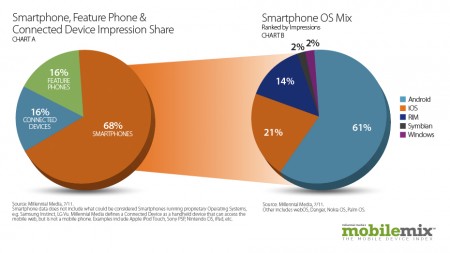 The latest Millennial Media ‘Mobile Mix’ has landed today and it shows Android continuing its dominance over all other mobile platforms.  According to their ad network metrics, Android has grown 15% month-over-month and now has a 61% share of overall smartphone impressions.  Apple comes in at a distant second place with 21% of the market, down six points from the month before.  For whatever reason, the dip was considerably bigger than the previous few months which only saw slight 1% declines.  Coming in third, RIM and their BlackBerry platform also dipped a point to 14% of the pie.

Read on through for additional bullet points and a few colorful graphs that also help to tell the story!