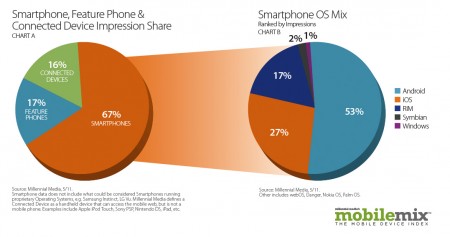 While Samsung remains comfortably in its spot as the number two manufacturer in terms of impressions share in May, HTC moved up to the number four position with an 11% impression share.

Even more interesting is Millennial Media‘s list of Top 20 Mobile Phones as ranked by impressions. The Motorola Droid and HTC EVO 4G are the two top Android devices, and HTC has six devices in the Top 20. However, while fifteen devices run Google’s Android OS, there are three BlackBerry devices and one Samsung device running the elusive BREW operating system. Also intriguing is that the LG Optimus S, a small device with a punch, had more impressions than the original HTC Incredible.

Most importantly, it appears that Android has maintained its position as the leading smartphone OS with a 53% impression share, and applications in the Music & Entertainment category have managed to squeak past Games to take over the number one spot in the mobile application category. It appears that Android is continue to charge forward through 2011, and with some exciting phones being released in the coming months, it is shaping up to be a great year for Android users.