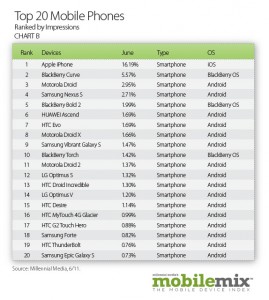 Millennial Media has released their June 2011 Mobile Mix report, which gives great insight into how the smart phone landscape is evolving.  We’ve tried to scale back on the number of “Android is growing super fast” studies but we always dig the way MM puts their reports together.  If anything, they tell us which particular handsets are doing well and which are not.  Hit the break for a few bullet-point details from the June 2011 edition!