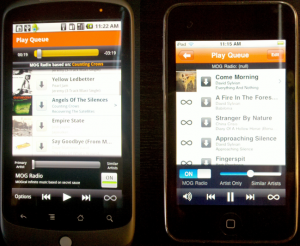 If you’re anything like me, you may be growing impatient with the repeated delays coming from Spotify and Rhapsody regarding on-demand music streaming services. As of this post, Spotify is now working on a next-gen version for a U.S. release (read: don’t expect that any time soon) and Rhapsody’s beta testing of their Android app has officially closed as of February 26th.

Luckily, the wait for on-demand music may soon be over! California-based MOG aims to have an app for Android available in “early Q2”. Representatives of MOG announced today at SXSW2010 in Austin, Texas that they are working on applications for both Android and iPhone, and that they are being developed side by side for a consistent interface. For $10 (U.S.) a month, users will get unlimited access to and downloads from MOG’s catalog of over 7 million tracks.

What’s exciting about MOG’s mobile application is that it combines key features included in current and future competitors’ services with unique features of its own. For example, users can create and download custom playlists to their phones, similar to Spotify and Rhapsody, but they can also download entire albums to their device. With MOG Radio, users can create artist stations (much like Pandora), but can customize the stations to their liking with a slider bar, allowing the user to choose to listen to only songs by a particular artist, mostly songs by related artists, or anywhere in between. Additionally, users can skip as many tracks as they’d like while listening to MOG Radio, as opposed to Pandora’s six skips per hour limit.

Although the user interface is being designed to be very similar to the iPhone, Android users will get the added benefit of voice commands. $10/month will grant users mobile and computer web-app access, which is currently available at a $5 monthly subscription.