The Play Store is flooded with games and apps that follow the “freemium” approach of making money, and statistics show that this is the best way of generating revenue rather than an initial purchase for the app. The success of freemium apps draws from the ability to bring in a larger amount of users due to the app being free, giving them a taste of what the app offers, then promoting the content of what they can have if they fork over a bit of cash.

Freemium apps have proven to be wildly successful, with apps such as Clash of Clans, Candy Crush and Game of War leading the revenue charts on the Play Store. It’s no secret that these apps do a phenomenal job bringing in money with the strategy of holding back much of the game’s content for in-app purchases. Advertising within the app brings in a good chunk of revenue, but the purchases users make play a much larger part in the app’s monetary success.

However I’ve never gotten into these games for a couple of reasons. Most of these freemium games move at snail’s paces in terms of player achievement. While the first few hours of Clash of Clans gives you the impression that you can accomplish and build so much within a short amount of time, the pace quickly slows down once you’re a few levels in and have gotten a good feel for the game. This isn’t accidental at all, but a clever strategy to make the player crave more and to advance quicker than their opponents. My second reason for not getting these apps is similar to what I was talking about the games’ pace. Assuming you don’t pay for anything in these apps, you’re going to be doing more waiting than playing. Hey, you’ve finally got enough coins to build a hut, check back in this evening to see it completed! That is, unless you’ve got some gems you’d like to spend…

When Bethesda announced at this years E3 show that they were releasing a mobile Fallout game, they said all the right things that made hardcore fans and casual mobile gamers alike yelp with excitement. No internet connection required, no building times, and only one type of currency in the game. Lunchboxes can be earned in the game or bought via in-app purchases, but these only provide bonuses to your game and are completely in-disruptive during your playthrough. 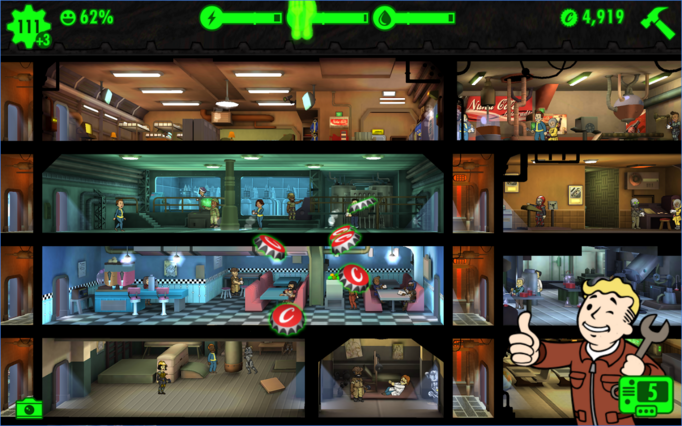 The team at Bethesda stated that this game was made not as a source of revenue, but to spread awareness for the upcoming game Fallout 4 on game consoles and PC. Later on, to everybody’s surprise, this game did make a lot of money for Bethesda. The game saw a large amount of success within its first week of launching, ranking higher than any other free app in the App Store in terms of downloads (yeah, even Facebook) and revenue (yeah, even Candy Crush). It’s impressive to see given that there are no ads, and the only thing you could buy in the game (lunchboxes) could be earned quite easily and are not essential to the game at all.

So what does this mean? It means that players found a serious amount of value in lunchboxes, as only one of them guarantees at least one “rare” item or character in the game and three other goods. For the value, the lunchboxes are quite cheap too. For $0.99, one lunchbox gives you the potential of bringing in one of your favorite characters in the Fallout universe, plus three other items. Though quite a different game, this system reminded me of Mass Effect 3‘s in-game purchases. Completely non-essential, and you could earn the packs quite easily, but for one dollar I had the chance to unlock some of my favorite characters in the game to play as. 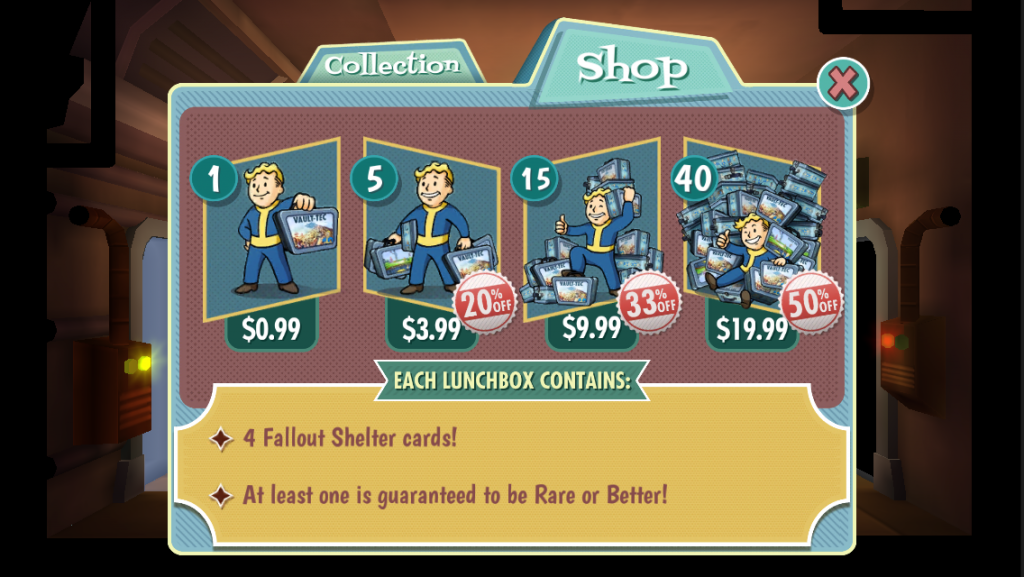 It’s also possible that people spent more money in Fallout Shelter simply out of appreciation for how unorthodox the game played as the freemium type. I personally was thrilled with how quick the game’s pace was given it was a builder game, so much so that I eventually paid one dollar for a lunchbox out of appreciation for the amount of content I was given for free. I never spend money in freemiums. Whatever the reasons, Fallout Shelter did really well. Over 5 million dollars in two weeks well. While the game isn’t at the top of the charts anymore, it’s clear that Bethesda isn’t aiming to be up there anymore with a higher focus on updating Fallout 4. The mobile game is still getting updates from time to time with a bit more content and features, but just about all of it is accessible without lunchboxes.

For long time players of Fallout Shelter, there’s no real reason to spend anymore money assuming they already have a great deal of unique characters and weapons. But they would if there was an increasing amount of content in lunchboxes that kept the value of them up. However, my point of all of this is, freemium games like this will do incredibly well if they offer their game without limitations, but offer an inside product that creates a great deal of value well worth the money. This product shouldn’t enhance the game’s pace or progress in any way, but provide a great experience the player wanted that doesn’t spoil anything (i.e. player skins, fresh characters, etc.).

You can check out Fallout Shelter for free on the Play Store if you haven’t already!

These were your favorite apps for 2015