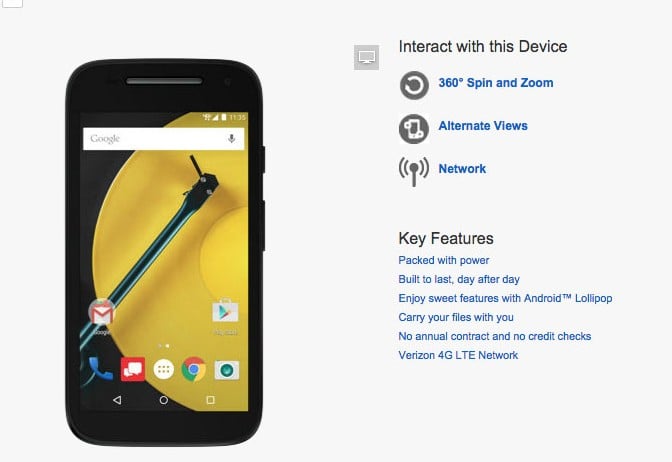 Barely a few weeks after the launch of Motorola’s second generation Moto E, Verizon Wireless has listed its LTE variant for sale on its website. Priced at $99 with contract and $199 without contract, this ultra-budget device is indeed a sweet deal for those who don’t want to compromise in the specs department.

Speaking of specification, the new Moto E LTE features a 4.5-inch qHD display and a 64-bit Snapdragon 410 processor clocked at 1.2 GHz coupled with 1 GB of RAM. In the imaging department, the handset sports a 5-megapixel rear camera and a VGA resolution front-facing camera. The smartphone promises to provide a good power back-up with its 2,390 mAh battery.

According to reports, Verizon’s prepaid customers who are planning to buy the Moto E LTE will get unlimited talk, text, and 1GB of data for $45 a month.

The 3G version of the Moto E is already being offered for $99 by Sprint, Boost and Virgin mobile.