Like Sony, Motorola is one of the latecomers to the 18:9 aspect ratio bandwagon. Well this summer, the Lenovo-owned company is going to release its first bezel-less phones.

Within the next few months, Motorola will be unveiling its next-gen flagship, the Moto Z3, alongside the more affordable Moto Z3 Play, both of which will sport 18:9 displays.

Speaking of which, the Moto Z3 Play just leaked in a number of new case renders. And as anticipated, the handset features minimal bezels all around. On the top front, we can spot the selfie camera, sitting alongside an in-ear speaker.

On the back, there’s a dual-camera setup with a dual-tone LED flash. Nothing else adorns the back. So where’s the fingerprint scanner, you might be wondering? Well it seems this year Motorola has moved it on the right side of the device. This is reminiscent of Sony’s recent phones. 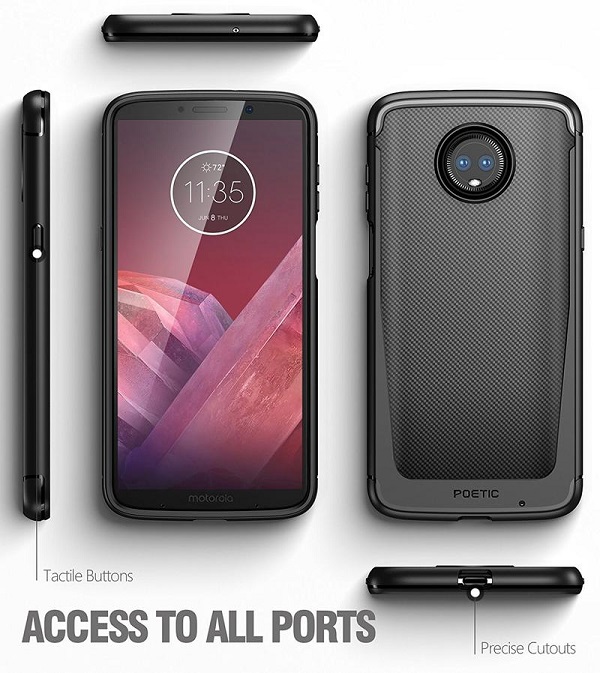 Above the scanner, we can spot two volume buttons for up and down. The power button is placed on the left side of the phone. The bottom is home only to a USB Type-C port, as it appears the 3.5mm headphone jack is no longer part of the package.

Ok, so what about the Moto Z3 Play’s specifications? According to recent rumors, the device will arrive with a spacious 6.1-inch display in tow and will rely on the services of a Snapdragon 636 processor.

Motorola is also going to offer 4GB of RAM and 64GB of internal storage, as well as a 3,000 mAh battery. The Moto Z3 Play will launch with Android Oreo out of the box.

Right now, we don’t have the exact launch date for the Moto Z3 and Moto Z3 Play. But last year, the Moto Z2 Play went live during the beginning of June. So, most likely the new flagships will be released around the same period.