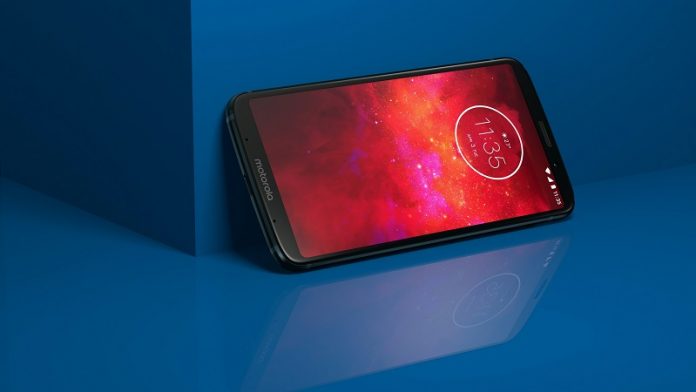 Motorola today announced its Moto Z3 Play, the first model to arrive from the new Z3 series, is available for pre-order. Customers can now pre-purchase the device through Motorola.com, Best Buy, and B&H Photo; it’s also offered as a Prime Exclusive Phone on Amazon.The phone costs $499.99

The new mid-range smartphone is a successor to last year’s Z2 Play model, which was quite well received by consumers.

While the Z2 Play was a pretty good-looking device, the Z3 Play makes the jump into trendy territory. It repudiates the chunky bezels and instead opts for a so-called bezel-less design and a modern 18:9 aspect ratio. Due to the changes, Motorola has managed to fit a 6-inch AMOLED screen in the same dimensions of a 5.5-incher.

Unlike last year’s model, the Moto Z3 Play has a splash-resistant glass body that is a bit heavier (156g vs 145 g) than its predecessor and thicker (7mm vs sub-6mm). While this means the Moto Z3 Play is a lot more prone to breakages, it’s also a lot more stylish.

Another big change is the fingerprint sensor that now sits on the side just below the volume keys, and also doubles as a power key.

On the back, you’ll find the camera bump which is yet again quite protruding, so your Moto Z3 Play won’t be able to rest flat on its back without rocking back and forth a little bit.

Speaking of the camera, the Z3 Play sports a dual camera setup that pairs a 12-megapixel sensor with a 5-megapixel depth-sensing sensor for Portrait shots. Motorola also throws in an 8-megapixel selfie camera with wide-angle lens and 1080p video capabilities.

What about performance? The Z3 Play gets an octa-core Snapdragon 636 processor, an upgrade from last year’s Snapdragon 626. It also comes equipped with 4GB of RAM and 32GB/64GB of internal storage (microSD card slot available to upgrade up to 2TB).

The Moto Z Play series is known for offering big batteries and the latest model is no exception. The device houses a 3,000mAh unit, just like before. What’s more, Motorola wants to make super sure you won’t run out of juice, so it’s also throwing in a free 2,200mAh battery Moto Mod if you’re buying it unlocked!

On the software front, the phone will ship with Android 8.1 Oreo out the box. Some of Motorola’s most popular feats including Moto Voice and Moto Display are also part of the package. Moto Voice, for example, lets you access device-specific feature via voice.

Just like in the case of previous Z phones, the Z3 Play is built around Moto Mods. This means the newcomer can play nice with all existing Moto Mods. So if you have a JBL Soundboost or Alexa Moto Mod, rest assured you’ll be able to use it with the Z3 Play.

Finally, Motorola partnered up with Google and built-in a shortcut for Lens right into the Z3 Play’s camera application.

In the US, customers will be able to pick it up from Sprint and US Cellular. Retailers Best Buy, Walmart, Target, Fry’s, and B&H Photo sell the unlocked version for $499.99, which will ship with the free battery mod. Last but not least, Amazon also offers it as part of its Prime Exclusive lineup.