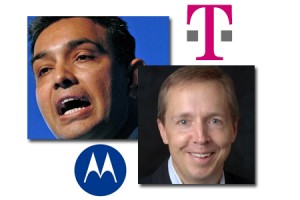 Motorola CEO Sanjay Jha said yesterday that the company was in negotiations with all of the major US carriers to bring Android devices to their networksÂ  Their first offering, the Motorola Cliq, was unveiled last week at Mobilize ’09.Â  Rumored to be dropping it November, it marks the first phone to carry the new MOTOBLUR UI on top of Android.

The new shouldn’t come as much of a surprise – most, if not all of them, have carried Motorola phones over the last few years.Â  After dropping Windows Mobile in favor of Android, they were bound to show up on all the major carriers.Â  “You want to carryÂ  one of our smart phones?Â  Fine, it’ll be Android.”

How many Motorola Cliqs are expected to sell this year?Â  As we enter the final quarter of 2009, one analyst believes 750,000 units is attainable.Â  Not too shabby for the 4th largest wireless provider in the US.Â  T-Mobile can only benefit from 3 different Android phones in their lineup.Â  They currently have about 12% of the market so they might want to push that agenda as much as possible.Â  Once the other carriers get their devices, T-Mobile could quickly lose any momentum or edge they have now.Â  If the Sholes delivers on the rumors, Verizon might be eating T-Mobile’s lunch come Christmas.

Let’s not discount Sprint’s marketing campaigns either.Â  Many are expecting them to push Android as hard as the Palm Pre.Â  Couple the HTC Hero with a fast network and Sprint can open the gap between #3 and #4 in the US. Here’s hoping that T-Mobile and Motorola really get behind their respective agendas.Â  It’s in the best interest of both parties to beat the Android drum as loud as they can.Â  If they don’t, come this time next year, T-Mobile could look like a “me too” company when it comes to smart phones.