Motorola on Friday announced the details, pricing, and availability for its Moto X, Moto G, and Moto 360 devices. Instead of worrying about X+1, X2, or any other silly names, we’re just getting the “new Moto X”. If you ask me that’s the best thing they could do. It works for the car industry and other tech products so why not a smartphone?

As the subjects of plenty of leaks and rumors over the last few months, we were glad to see these become official. Lets hop right into it!

The new Moto X builds on the flagship design introduced just over a year ago. Key improvements include the bigger 5.2-inch 1080p display, a 13-megapixel rear camera, Qualcomm Snapdragon 801 processor, and 2300mAh battery.

Instead of a plastic frame around the device we get an aluminum trim (sexy, I might add), and new case options. Motorola has updated its palette to include new shades of colors; various wood and leather options are also available for the rear. There are 10 points of accent customization this time around, including the speaker grill.

The Moto Maker experience is bolstered with new options such as starter designs, comparison tools, and a more realistic color.

In terms of software, the Moto X is all stock Android with very few added touches. The stuff that is included, however, is really impressive and should see us physically touching phones even less. Between Driver Mode, Meeting Mode, Motorola Assist, and the others, there’s plenty here to enhance the experience without pushing an agenda. Motorola Migrate gets a handy update to allow for transferring of contacts from non-smartphones, a plus for those baby boomers who have yet to make the jump. 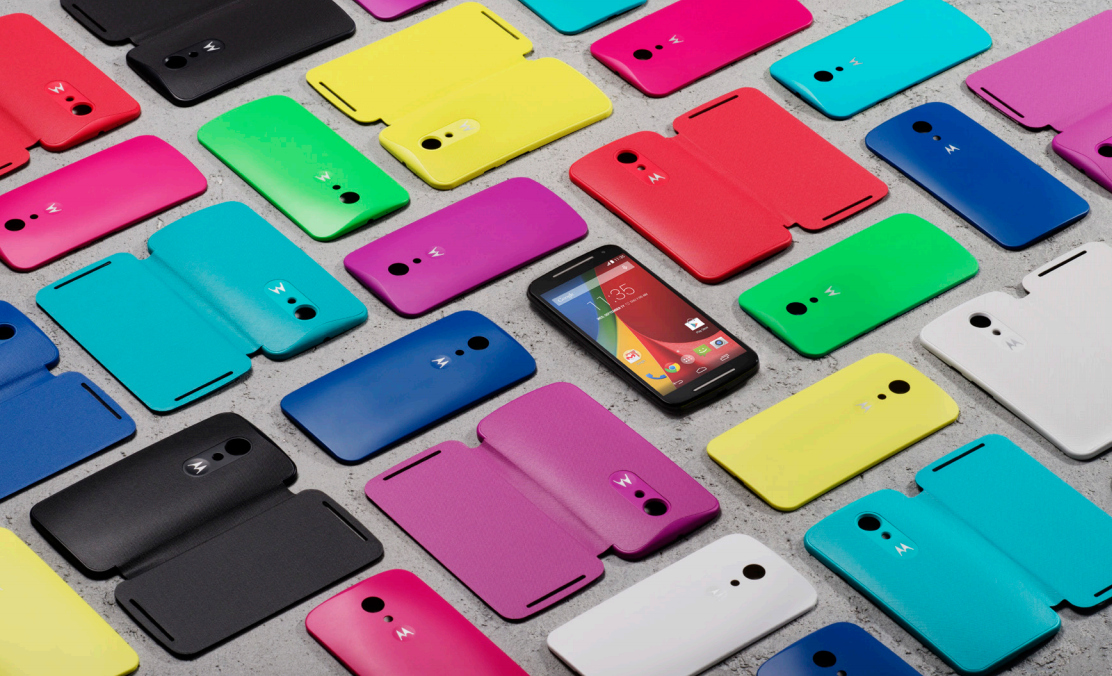 The new Moto G also steps things up on a number of fronts all the while retaining the same attractive price point. For your money you now get a 5-inch HD display, an 8-megapixel rear camera, microSD expansion card slot, 2-megapixel front-facing camera, and double speaker setup. Toss in some nice touches in the camera department and it’s easy to see why Motorola is so excited about the new Moto G. Fun fact: the first generation Moto G is the best-selling Motorola smartphone of all time.

The Moto X will be offered for $99 with a two-year service agreement via select carriers later this fall. Motorola will also sell an unlocked bootloader and unlocked SIM version for $499 through its website.

The new Moto G is available starting today unlocked and off-contract for $179.99 USD through motorola.com as well as via U.S. retailers. Moto G also goes on sale today in India, France, UK, Brazil, Spain, and on motorola.de in Germany.

At long last we finally get to see the Motorola smartwatch find its way to retail stores. Available on Friday, September 5, the watch can be purchased in a choice of three leather bands. Pricing, as expected, is $250 for the device. Later this year there will be an option to buy the Moto 360 with metal wrist straps for $299.99. Those who buy the leather version can buy metal straps for $79.99 at that time; leather straps are $39.99 each.

Motorola also introduced a new, albeit clever, Bluetooth accessory for your ear. Taking up about as much space as a hearing aid, the Motorola Hint connects to your smart phone and allows for all of your normal A2DP functions. Pair it with a device that offers Motorola Voice Assist, such as the Moto X, and its even better.

Features include the ability to have messages read aloud, search Google Now, reply to messages and calls, and much more, all without touching your device. Battery life is rated at 3 hours of talk time but the carry case punches things up with an additional 7 hours worth of juice, too. This guy will be available in six color options on motorola.com and select retailers in the US for $149.99 later this fall.