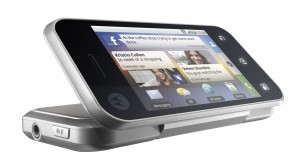 Motorola CEO Sanjay Jha’s press event at CES today lasted less than half an hour but he crammed some fairly big news into that short time. The highlights:

The Backflip has a unique form factor: when closed, the keyboard sits exposed on the back face of the device. When open, a “Backtrack” touchpad is exposed on the surface behind the screen. Developers will be able to code for the touchpad via an API, which sounds pretty cool until the word “fragmentation” pops into your head. Like the Cliq, it’ll feature Motorola’s custom UI, Motoblur.

AnÂ official press release on the Backflip is available on Motorola’s site, and Engadget has photos and video from their hands-on with the device