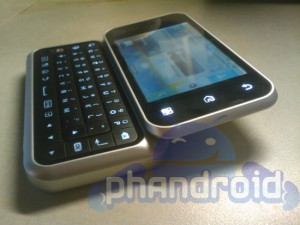 Our friends over at phandroid were just passed along some images of the Motorola Motus.Â  According to their tipster, we can start calling this one the Enzo, however it might be Backflip by the time it rolls out.Â  The images finally help us understand just how the hinges and backflipping is going to work.

The keyboard is “always revealed and flips from the back as you can see in the picture. When the keyboard is open a touchpad on the back of the phone is revealed which allows you to easily scroll through webpages and apparently it works very well.”

Like the Cliq, the handset is based off of MOTOBLUR with the Android 1.5 backbone.Â Â  In a move that reminds us of Verizon would do, it appears AT&T is branding the phone with their own apps and yanking out the Google stuff.Â  This doesn’t come as a surprise as it echoes sentiments expressed by CEO Ralph de la Vega earlier this year.

I mean, the whole idea behind Android is that itâ€™s gonna be an open OS, and so I donâ€™t wanna roll an open OS to market that has primarily Google apps on it, and I think thatâ€™s gonna happen. I mean, I see a lot of activity, I think itâ€™s got a good future, and I think it makes a lot of sense that the OS is open-source, separate from Google apps that are also very good.

Based on the pictures, we can see the following AT&T titles loaded on the Enzo.

So what do you think?

Any AT&T customers want to weigh in on what you think of the potential first crack at Android? Hit or Miss?Â  Does the word ‘flagship’ come to mind when you look at it?